Skip to Content
Home Blog Spiritual Growth The Riveting Symbolism of the Number 12 in the Bible, Plus More Than 50 Incredible Examples 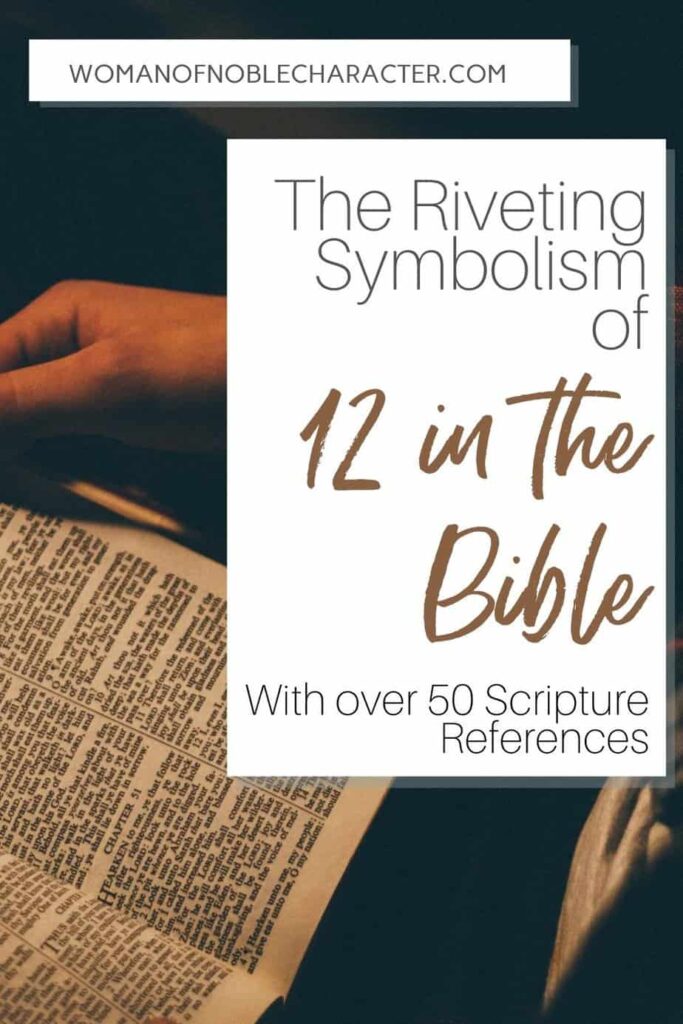 When exploring which numbers in the Bible carry symbolic significance, number 12 in the Bible stands out as one of the most prominent in Scripture. In fact, it appears 187 times throughout the Old and New Testaments.

Other numbers with deep biblical significance include 3, 6, 7, and 40.

Before we dive into the significance of the number 12 in the Bible, I want to share a word of caution. We need to be careful about looking for hidden meanings, messages, or even codes in certain numbers of the Bible.

If you search “Numerology” on Google, you find the following definition:

“Numerology is the pseudoscientific belief in a divine or mystical relationship between a number and one or more coinciding events. It is also the study of the numerical value of the letters in words, names, and ideas. It is often associated with the paranormal, alongside astrology and similar to divinatory arts.”

If, however, we search for “Biblical Numerology”, we get a closer match:

“Biblical numerology is the use of numbers in the Bible to convey a meaning outside of the numerical value of the actual number being used. Numerological values in the Bible often relate to a wider usage in the Ancient Near East”

However, the results still show some new age meanings, so we need to view the results with discretion.

That being said, there IS biblical significance to several numbers in the Bible, but we should be careful about self-interpretation of these numbers, including the number 12 in the Bible.

Ultimately, I believe God did have reasons for using certain numbers repeatedly in the Bible, but only He knows the true reasons.

The Riveting Symbolism of the Number 12 in the Bible, Plus More Than 50 Incredible Examples Click To Tweet

The Symbolism of the Number 12 in the Bible?

The number twelve in the Bible seems to be very important to God and it represents, in most cases, the number of perfection and authority.  It additionally signifies completeness.

It is often used in the context of government. For example, because Jacob has 12 sons, they form the 12 tribes of Israel. There are also 12 minor prophets in the Old Testament.

As mentioned above, the number twelve is found 187 times in the Bible and is particularly significant in Revelation, showing the authority and perfection in the New Jerusalem.

Jesus chose 12 disciples and later replaced Judas Iscariot with Mattias to maintain 12 disciples. (Acts 1) This showed the perfection and authority of those who followed Jesus.

Similar to the number three in the Bible, not every instance of the number 12 in the Bible is a ‘good’ kind of perfection. For instance, Jesus healed a woman who had been bleeding for 12 years, (Matthew 9:20-22).

The 12 years could signify how bad her condition was, signifying the malady as a ‘perfect storm.’ Or it might mean that this was the completion of a difficult period and God will do something new now.

In most instances, however, 12 in the Bible represents something good.

The Significance of Numbers in the Bible

Numbers in the Hebrew culture tended to have a deeper meaning than what we subscribe to about numbers today.

In most occurrences in the Bible, numbers have a literal and symbolic meaning (i.e. Jacob didn’t metaphorically have 12 sons, he literally had 12 sons), in other cases numbers may have only a symbolic meaning.

Six days of creation, seven including the rest day, may have been literal, but it also may have been simply symbolic. (Genesis 1). The number of saved souls in heaven will likely be more than 144,000 (Revelation 7), but 144,00 is 12 times the cube of ten—a quotient of perfection.

While numbers in the Bible can give clues to readers into a deeper meaning in scripture, we need to ensure the context of the passage aligns with the typical symbolism attributed to the number.

We have to be aware that not every number has a biblical meaning.  For example, Seth may just have happened to live to the age of 912 and there may not have been any significance to his age.

Jesus first spoke in the temple with religious leaders at the age of 12 when he and his family had traveled to Jerusalem for Passover.

And the child grew and became strong, filled with wisdom. And the favor of God was upon him.

2. 12 cakes were placed in the Tabernacle.

An interesting use of 12 in the Bible is that the priests were instructed to place 12 unleavened cakes in the Tabernacle. The unleavened form of these cakes may have symbolized the same bread used in Passover when the Israelites left Egypt.

3. 12 of several items were instructed to be place in the Tabernacle

The Israelites, when they were wandering in the desert after escaping from Egypt had 12 spies go out and scout for them. (Numbers 13).

6. Nebuchadnezzar’s dream was fulfilled after 12 months.

Nebuchadnezzar had a dream that was interpreted to mean he would act like an animal for a while. The prophecy ended up being fulfilled just one year later (Daniel 4).

The Israelites were faced with an impossible decision when they were surrounded by Midianite soldiers. They could choose to lay down and die or fight back.

The twelve thousand men came together as one force ready for battle against these much stronger enemies. This may be a case where there weren’t exactly 12,000 men, but the writer simply indicated that a vast number showed up to the battle. (Numbers 31)

When Jesus performs the miracle of feeding 5000 people, there were 12 baskets full of leftover food.

Ai is destroyed in Joshua 8, with 12k people falling that day. Their deaths of them showed complete and perfect destruction for all the inhabitants of Ai

Solomon appointed 12 district governors to govern the land. The number of governors points to the symbolism of 12 in the Bible, especially as it relates to government.

Elisha, while plowing 12 oxen, is called into his prophetic ministry by Elijah.

13. The Tree of Life in Revelation will bear 12 fruits.

In New Jerusalem that God will bring at the end of time, there is a tree with 12 fruits. One fruit for each month in a year!

15. There are 12 gates that descend out of heaven in the New Jerusalem.

These gates are guarded by 12 angels.  Each of the gates have been named for one of the 12 tribes of Israel.

16. 12 thousand people from each of the 12 tribes will be saved near the end of the present world.

18. 12 precious stones will be used as the foundation of New Jerusalem.

20. 12 thousand people will be taken from the earth to serve the Lamb of God, Jesus.

21. The high priest’s breastplate had 12 precious stones embedded within them.

22. There are 12 Minor Prophets in the Old Testament.

23. There are 12 historical books in the Bible.

26. Twelve curses were announced for disobedience to Israel. (Deuteronomy 27).

27. A young Israelite male took 12 years before he could be dedicated as a “son of the law.”

30. During the dedication of the Tabernacle, the leaders of Israel made an offering of 12 oxen.

31. God ordered Moses to collect 12 rods, one from each of the 12 tribes, and place them in the Tabernacle. The rod that blossomed would be the man He had chosen. That man would turn out to be Aaron.

32. Twelve stones were to be chosen from the Jordan River to act as a memorial that God had dried up the Jordan in order for the Ark Of The Covenant and the Israelites to cross it.

33. When the men of Gibeah killed a man’s concubine, he cut her body into 12 pieces and sent it throughout all the territory of Israel.

34. Solomon’s throne had 6 steps leading up to where he sat, and there was a lion on each side of the six steps (12 total).

35. A large basin called “the Sea” was built to hold water for the priests, and it was set upon 12 oxen statues.

36. The prophet Ahijah tore the garment he was wearing into 12 pieces.

38. Evil King Manasseh was 12 years old when he became king.

39. Nehemiah was appointed to be the governor in the land of Judah for 12 years.

40. Haman sought to destroy all of the Jews in the 12 month.

41. God’s judgment fell on King Nebuchadnezzar 12 months after his dream.

42. The woman with the “issue of blood” had been bleeding for 12 years when she was healed by Jesus.

43. The daughter of Jairus, whom Jesus brought back to life, was 12.

44. Jesus said that in the regeneration, the 12 apostles would sit on 12 thrones judging the 12 tribes of Israel.

45. When Jesus was being arrested, He said He could call for more than “12 legions of angels” if He needed help.

46. Paul laid hands on “about 12 men,” and “the Holy Ghost came on them; and they spake with tongues, and prophesied”.

50. 12 people were anointed for special service

Twelve people are specifically noted in scripture as being anointed for a unique task or responsibility.

51. Only 12 people in the Bible have names with just two letters.

52. Twelve patriarchs from and including Shem (one of Noah’s sons saved in the Ark) to Jacob (Israel) are Shem, Arphaxad, Salah, Heber, Peleg, Reu, Serug, Nahor, Terah, Abraham, Isaac and Jacob.

God uses numbers to bring about his kingdom and reveal himself. We have 12 months in a year, and the number 12 in the Bible is also used for governments in the past and the future.

The more we catch these significant numbers throughout Scripture, the stronger our faith in God’s plan becomes.

God used numbers for symbolism in the past, as we see with the number 12 in the Bible, and He will continue to use them in the future.

.Of all the numerals found in scripture, twelve and three, six, seven, and forty are unmistakably used symbolically in God’s word.

Have you ever noticed the prevalence of the number 12 in the Bible? There are dozens of instances where this number is used as a symbol for perfection or completion.

I’ve just scratched the surface here, but I hope you will take some time to look up more examples of 12 in Scripture. As you do, ask God to reveal what He wants to say to you through His beautiful symbolism.

When you see how often God employs numbers as symbols in His Word, it becomes clear that He is a God who delights in using intricate details to communicate with us. The next time you come across the number 12 in your reading, stop and spend some time meditating on what message God might be trying to say.

You may enjoy this video by Troy Brewer and Troy Brewer ministries about 12 in the Bible.

Or one of these recommended resources for further study:

Prophetic Numbers of the Bible: The Numbers in the Word of God by Charles E. Rhone Sr.

Number in Scripture: Its Supernatural Design and Spiritual Significance by E. W. Bullinger