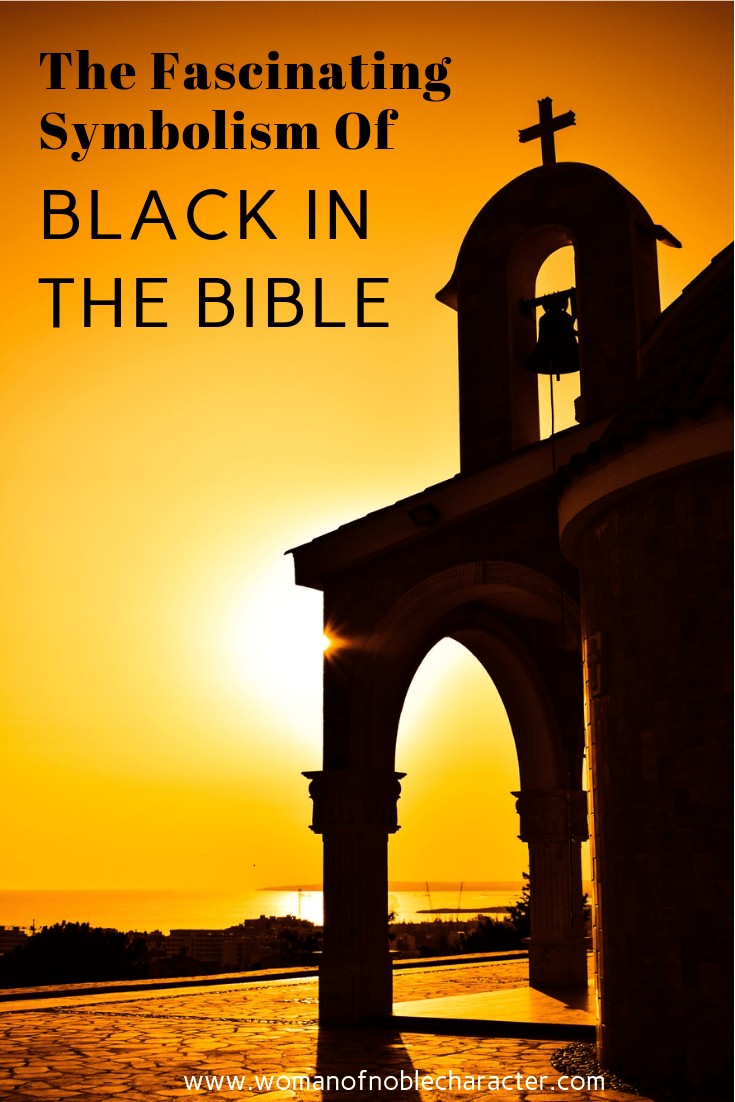 Today, we are concluding our series of color symbolism in the Bible as we look at black in the Bible. In previous months, we have examined red, green, blue, white, and more. (For an overview of colors in the Bible, see this post).

Get The PDF
I have everything that you need for an in-depth study of the symbolism of colors in the Bible. But it is a long read. If it’s more convenient, you can purchase the PDF file for only $5. It has the full article including
pictures, (this post plus 6 more going deep into the symbolism and scripture plus all of the PDFs, videos and more). This way you can print it out and will be available for you to refer to anytime you want.

The Ultimate Guide to the Symbolism of Colors in the Bible 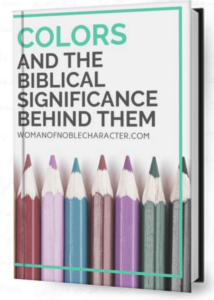 The Symbolism of Black in the Bible

Black is, of course, the darkest color. It lacks brightness or a hue, and although it absorbs light, it does not reflect any back. Scripture states that God is light (Psalm 104:2, 1John 1:5) and that the meaning of the devil’s name before he became God’s adversary was ‘light bringer’ (Isaiah 14:12). The universe God initially created was filled with His light, both literally and figuratively (see Revelation 21:23 – 24, 22:5) and was not black or dark.

When Lucifer chose to sin the light both in himself and that which he brought became black (which God determined beforehand would be a consequence of disobedience as we see in Isaiah 45:7). He became the first dark or black ‘thing’ that had ever existed when he turned from God.

In the physical universe, a black hole is a celestial object whose massive gravity pulls in all matter, including light, yet itself remains dark. Lucifer became a spiritual example of this physical happening when he took all the light God gave him and turned it into darkness.

The color black symbolizes suffering and death in the Bible. It’s used to represent mourning (Job 30:28, 30, Jeremiah 14:2), famine (Lamentations 5:10, Revelation 6:5), judgment of sin (Jude 13), death and the grave (Job 10:21-22), and more. The color black lacks brightness and hue. It does not reflect any light. Instead, black only absorbs light. The Bible tells us that God is light (Psalm 104, 1 John 1:5). It’s interesting that prior to Satan’s fall from Heaven, he was an angel of light (an angel of God), and, when he sinned, he fell like lightning from Heaven (Luke 10:18). Now Satan exists in darkness, no longer in God’s light.

Similarly, Adam was created in light and perfection, in the image of God, with God’s Holy Spirit to lead and guide him. But when Adam sinned, his light left him and the curse of death was pronounced upon him. Since Adam, all have been born in the “blackness” of sin.

Similarly, Adam was created in light and perfection, in the image of God, with God’s Holy Spirit to lead and guide him. But when Adam sinned, his light left him and death was pronounced upon him. Since Adam, all have been born in the “blackness” of sin.

There is none righteous; all have sinned and fall short of the glory of God.- Romans 3:10, 23

For the wages of sin is death; but the gift of God is eternal life through Jesus Christ our Lord. – Romans 6:23

In the KJV Bible, the word ‘black’ occurs eighteen times, three of which are in the New Testament. The words translated as this color and its very similar references such as “dark,” “darkness,” etc. come from a variety of original language sources. 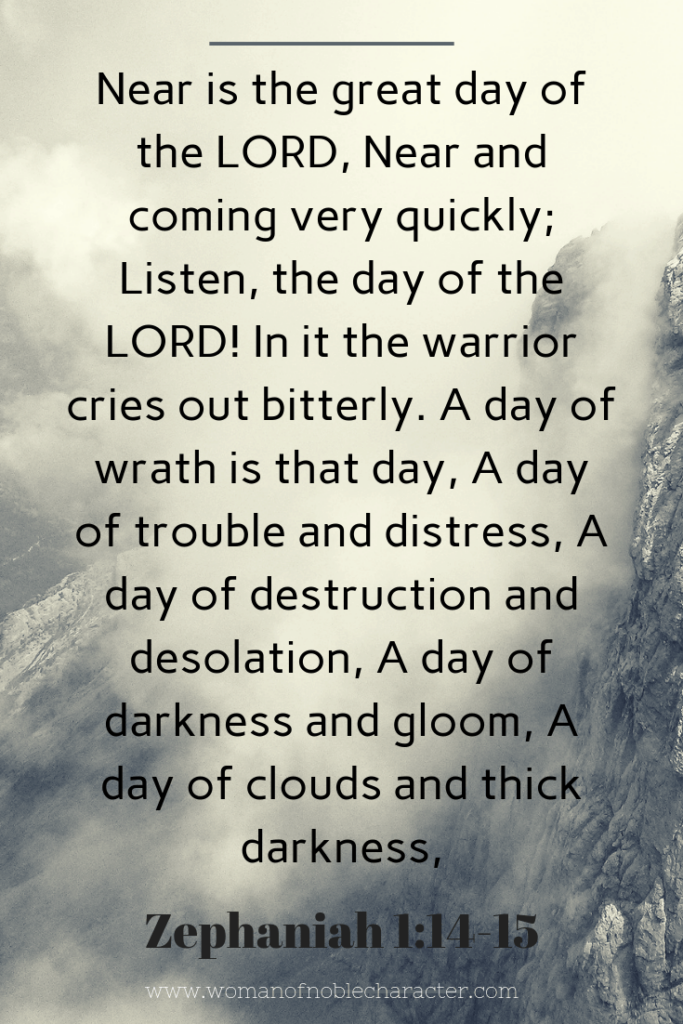 The Bible is clear in its condemnation of occult practices such as witchcraft, fortune telling (soothsaying), consulting the dead through mediums (channeling), sorcery, astrology and alike (Deuteronomy 18, Leviticus 19:31, 20, Acts 19:18 – 19 and so on). Because of their “darkness”, these practices are known as black magic.

Overview of Black in The Bible

Black is primarily associated with the negative aspects of human experience – including death, disease, famine, and sorrow – all of which are the results of sin. The exception is the implication of health when describing hair.

Hebrew and Greek Forms of Black in the Bible

BibleHub shared some references to black in the Bible in various forms that shed some light on its usage.

NAS: has remained, however, and black hair
KJV: at a stay, and [that] there is black hair

NAS: I am black but lovely, O daughters
KJV: I [am] black, but comely,

Did you learn anything new in this study of black in the Bible? If so, tell me below. If you have something to add, I’d love to hear it!

What did you think of this series on color symbolism in the Bible?

While I haven’t found many resources on color symbolism in the Bible, the below recommendation is a terrific resource (and inexpensive, too!) for Bible symbolism, including a section on color. 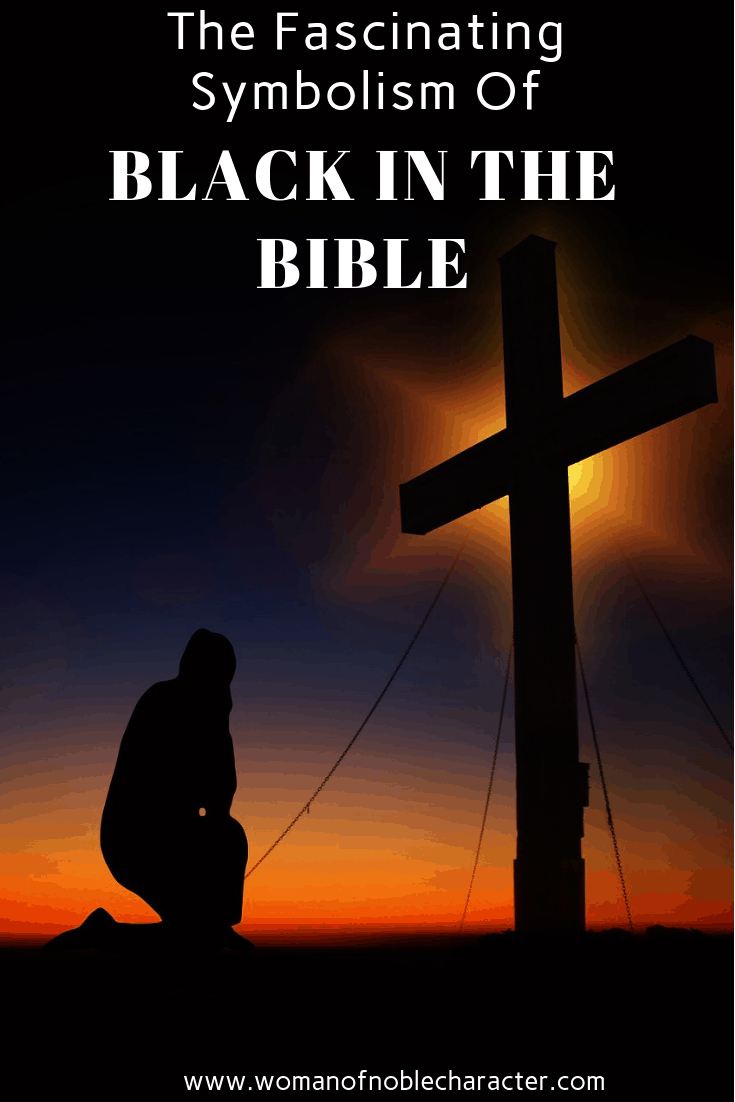 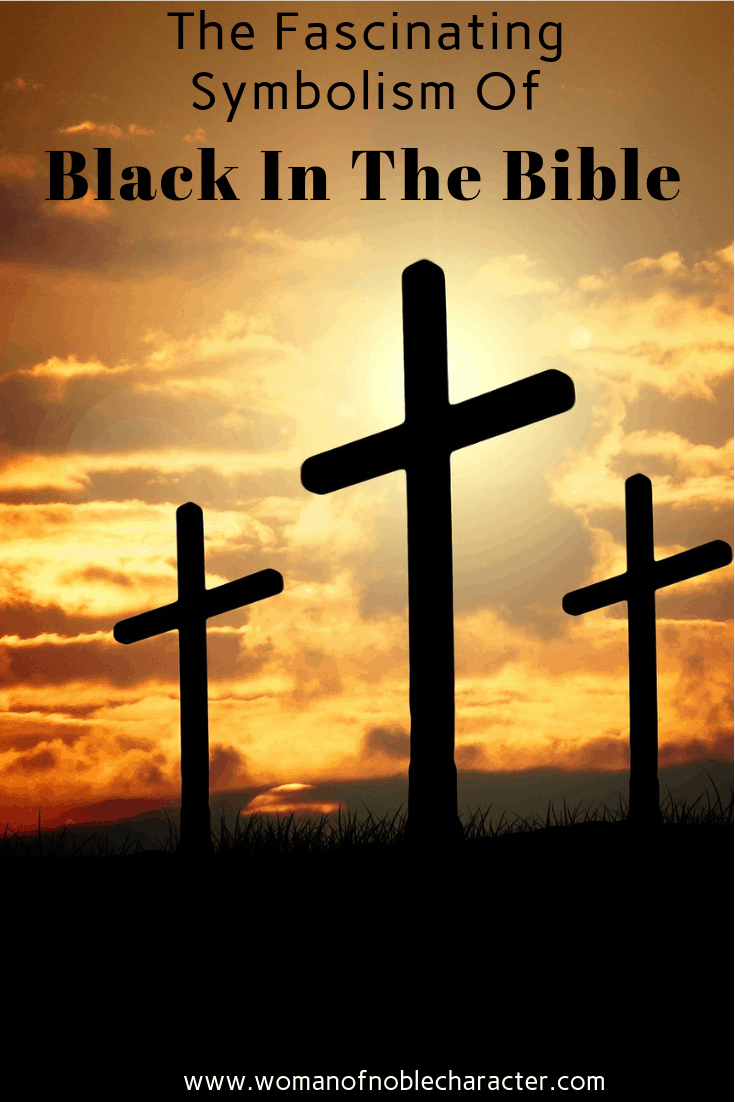 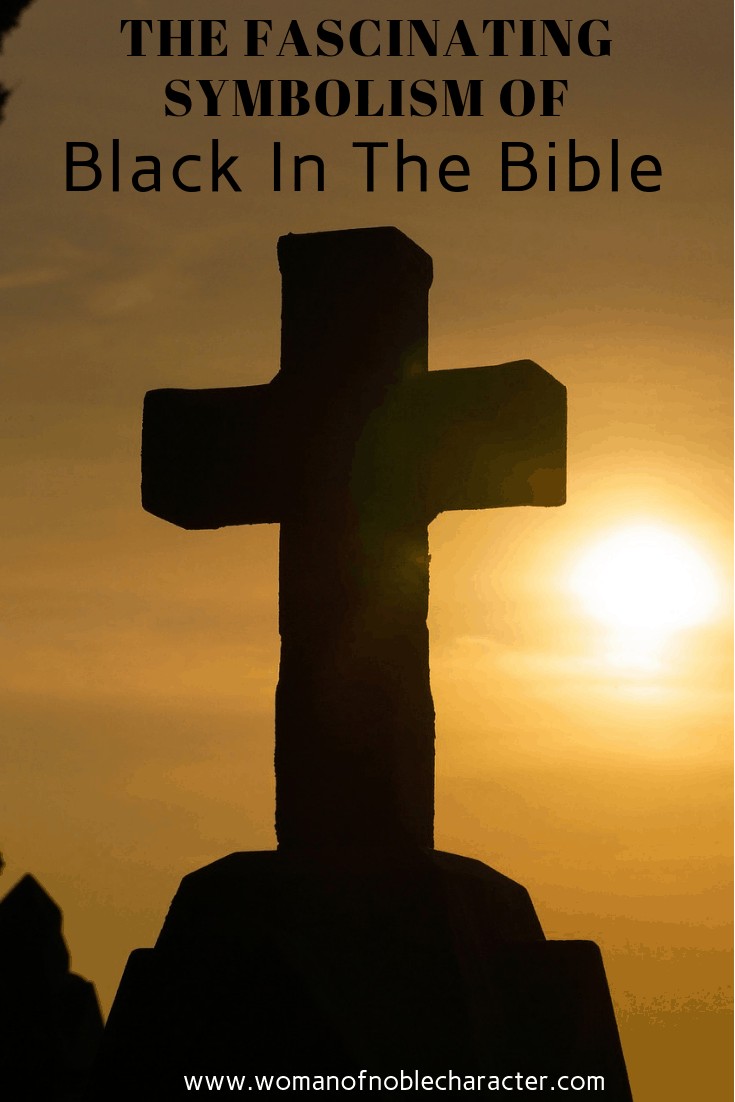 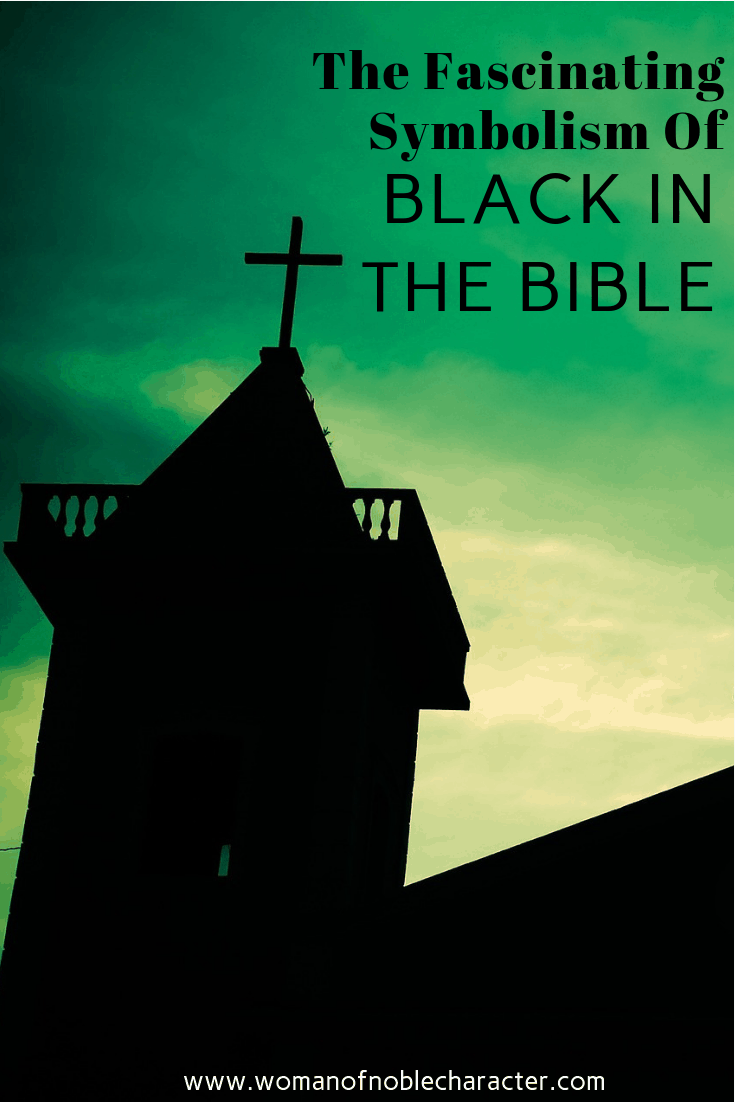 GEN 1:2b..... and the darkness was upon the surface of the deep. Word of God moved upon the face of the waters and God said let there be light. These are clearly the waters that break when the sun's come forth from the mother. His true mother is wisdom she's justified of her children Christ states in the NT. This darkness is thought heart the veil of the spirit the mind and the heart of God. Wisdom came forth as daughter took her as wife spoke or moved upon the waters to have the word come out vibration. God not speaking in ignorance I thought everything out and remember he had more good thoughts about you before he made you then you will have in all your creation and eternity. That's deep it doesn't speak about the bad thoughts but God usually loves to speak on the good, Nay HE loves to speak on the good.

Thus when put to heart you can see why it is dark for we are in a fallen world and in heaven you wear God as a garment as your skins here you fill up with him and thus in heaven your garments are white they reflect light repute it the darkness of our flesh here if we fill up with truth of course that is darkness not by the Sun but by the sorrow yeah even under death says Christ, Jonas says angry unto death, and so here through spiritual eyes we would be darkened cooked in their fires their games fires up a lock idle legal claim everything you know to the Cross Colossians 2: 14-16 . The women are always veiled God does make sure of it second at 13 knew this it's one of the things men will come to realize as we approach. I hope this helps.

My question is this, why must a person person wear the color black when mourning.

Hi, Josie - to be honest, I don't know. It is not a biblical practice as they wore sackcloths in mourning during biblical times.

I pray my mail finds you and your husband well and glorifing God the Father and His beloved Son, Lord Jesus. I enjoyed your study on the word black which it was the word blackness that caught my interest. I have been thinking about God's face being like blackness for the hurt of the daughters. I think there is a lot of blackness coming to the world. It seems that the closer we get to God...the darker the world seems to be getting spiritually. We must all give God all his glory and humble our hearts and lift up the world for the Holy Spirit to prepare those who belong to Jesus to repent and return to God before this window closes. Till we meet in New Heaven and New Earth, Glory and dominion to God and to the Lamb in Jesus name.

I agree that world seems to be a darker place, especially right now. May we continue to grow closer to God during these trying times. Thank you for writing and stopping by.

What about human black. I understand the color black due sin. God I know have a different meaning for human black. Best. Regards Theadis Smith

This study was more on black things, not people. There are people of all skin colors in the Bible, but no symbolism attached to it. It is primarily where they were from. Thanks for stopping by.