Christians and depression. They almost seem like an oxymoron when mentioned together. I mean, as a Christian, how can I be depressed? Isn’t it a sin to be depressed? God doesn’t make mistakes, right? We learn that as a child in Sunday school.

What about well-meaning Christian friends who advise that you just need to “give it to God” or walk closer with God or, even, that your depression must be due to a sin in your life?

Let me tell you, dear friend, that yes, you can be a Christian and be depressed and no, it is not a sin. There are several key figures in the Bible who, at least at times, struggled with depression. There are quite a few illustrations of christians and depression in the Bible. Let’s take a look at two of them.

David is quite the biblical celebrity. He was the eighth and youngest son of Jesse from the kingly tribe of Judah. He was also a direct descendant of Ruth the Moabite. David began his life as a shepherd in Bethlehem. One day, the prophet Samuel called him out of the field and anointed him without the knowledge of the current king, Saul. David, his life and his story are told in many of the books of the Bible including Samuel, 1 Chronicles and most notably, perhaps, Book of Psalms. David says in Psalm 42:11 “Why are you downcast, O my soul? Why so disturbed within me? Put your hope in God for I will yet praise him, my Savior and my God.”

We know that David experienced loneliness, grief over sin and that he felt particularly depressed after the death of his sons. I think, it’s safe to say that most of us have experienced sadness and maybe even depression during times of grief and loneliness. David’s transparency and honesty about how he was feeling gives hope that even as King and a man after God’s own heart, depression is real and that he, and we,  can overcome it.

Elijah was discouraged, weary, and afraid. After his great bold and courageous victories over the prophets of Baal (1 Kings 18), this mighty man of God feared and ran for his life, far away from the threats of Jezebel. And there in the desert, he sat down and prayed, defeated and worn: “I have had enough Lord, he said. Take my life, I am not better than my ancestors.” 1 Kings 19:4  Elijah seemed to have given up all hope and just wanted to die.

For more examples of Bible figures who faced depression, see this article from Crosswalk.com

My Story – Christians and Depression

Have you ever felt that way? Sadly, I have. Since I was a teenager, Ihave struggled with depression on and off. After the death of my mother in 1999, I was prescribed an antidepressant from my family doctor. For sixteen years, I took that daily “happy mommy pill”, as I called it. There were still times that I felt depressed, though. At some points, I had even considered how much better off my family would be without me. Those in my circle of friends and family who didn’t understand depression or have never experienced it, offered advice “just be happy” they said “being happy is a choice”. “You have to pray about it” or “give it to God”, they opined.

During these periods of depression, I withdrew from friends and family. I didn’t want to go anywhere or do anything. I felt worthless, overwhelmingly sad. I cried – a lot. I cried out to God, too, asking him why I had to go through this. Sometimes, my depression resulted in sin.

My faith never waivered during these times, though. I still loved the Lord with all of my heart. I still attended church and prayed daily, but yet, I was depressed. After losing my health insurance in 2015, my doctor prescribed a cheaper, generic antidepressant. The side affects were pretty awful including nausea, restless leg syndrome and wild mood swings. I made a decision, without consulting my doctor (I strongly recommend that you do not do as I did) and stopped taking the antidepressant completely. Then, instead of side effects, I had withdrawal symptoms. After sixteen years of being medicated for depression, my body was rebelling. For nearly a month, the withdrawal caused sleep problems, nausea, headaches, shakiness, dizziness, violent mood swings, anger – out of nowhere. It was truly one of the worst months of my life. My boyfriend,at the time (now husband) stood by me, helped me through and let me talk, and scream when I needed to. Eventually, the symptoms subsided and I entered my new normal. I’ve not been on any medication for depression since then. Occasionally, I do feel depressed and more often, anxious, but I’m better able to manage it on my own.

When I am feeling down, I share it with my husband and we pray about it and over it. I read my Bible and write scripture in my journal. One of my favorite verses is Philippians 4:6 “do not be anxious about anything, but in every situation, by prayer and petition, with thanksgiving, present your requests to God” or Psalm 34:17-18 ESV  “When the righteous cry for help, the Lord hears and delivers them out of all their troubles. The Lord is near to the brokenhearted and saves the crushed in spirit.”

Depression will always be a part of me. It is how I am wired. How God created me. But it no longer defines me. I am defined by God as His creation and his daughter. Depression, I believe, comes from Satan and I know that my God is bigger than depression.

For more resources on Christian depression, consider these recommended books:

I’m Not Supposed to Feel Like This: A Christian Approach to Coping with Depression and Anxiety by Chris Williams,‎ Paul Richards,‎ Ingrid Whitton

Spurgeon’s Sorrows: Realistic Hope for those who Suffer from Depression by Zack Eswine

One thing that helped my depression was taking back control of my home. In my post on the link between clutter and depression, I shared what an effect clutter can have on your state of mind. I love the Ultimate Bundle Productivity Bundle for all of the resources on managing my time, routines, and other areas of organization. It helped me so much in regard to controlling my days and reducing my depression.

For the link between clutter and depression, see this previous post. 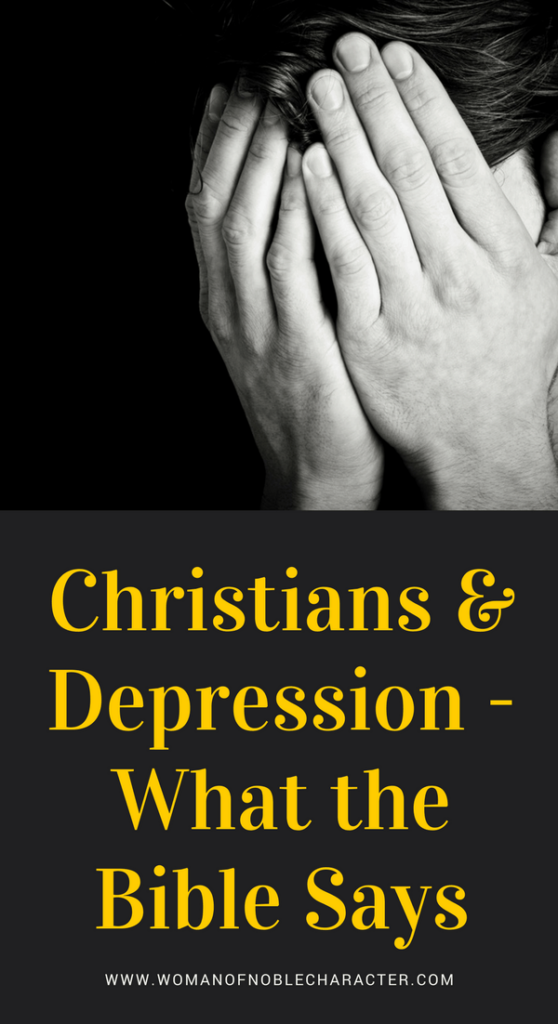