Skip to Content
Home Blog Spiritual Growth Deborah in the Bible: What We Can Learn from Her About Courage And Faith 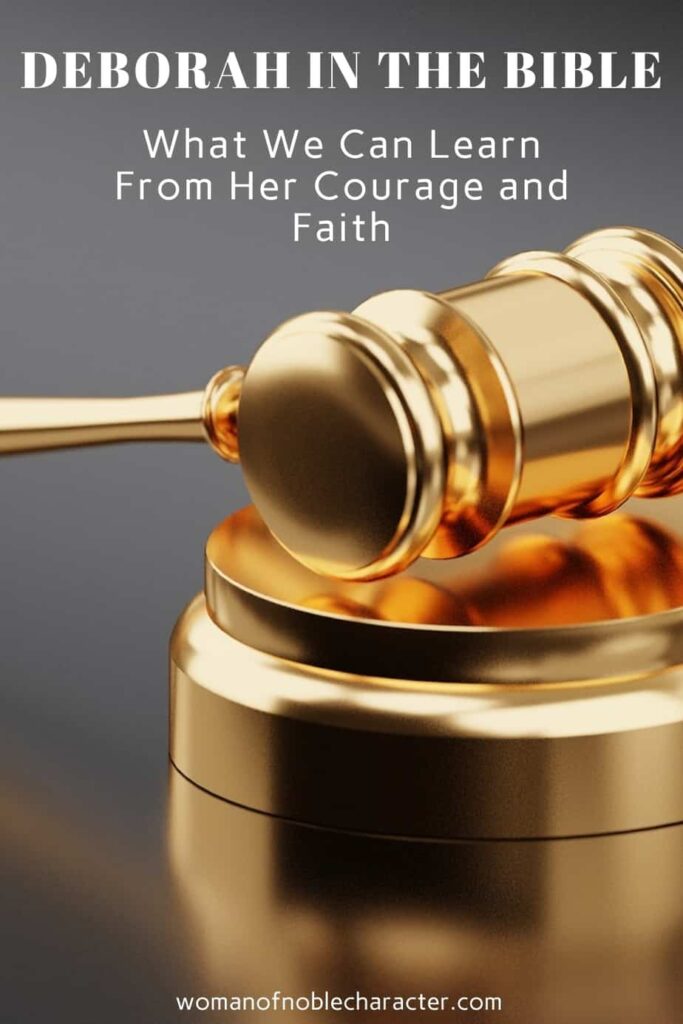 As we continue our look at women of the Bible (see this post on Rahab or this one on Ruth), we would be remiss if we didn’t include Deborah in the Bible.

Judge Deborah ranks among the most famous women of the Bible. Deborah stands out not only for her wisdom, but, also for her courage. She is the only woman of the Old Testament who is known for her own faith and action, not because of her relationship to any man.

Who was Deborah in the Bible?

With an impressive resume of judge, military strategist, poet and prophet, she was also a singer and songwriter.

Judge Deborah was only one of five women described as a prophet in the Old Testament (the others are: Miriam (Exodus. 15:20), Huldah (2 Kings 22:14; 2 Chronicles 34:22), Noadiah (Nehemiah 6:14), and “the prophetess” (Isaiah 8:3). As a prophet, judge Deborah was said to hear God’s voice and share the Word with others. As a priestess, she did not offer sacrifices, as the men did, but she did lead worship services and preach.

The only other person who was a combination prophet and judge was Samuel. (Now that’s some impressive company!)

Now Deborah, a prophet, the wife of Lappidoth, was leading Israel at that time. – Judges 4:4

In Old Testament times, a woman could be only three things:a virgin, a married woman, or widowed. Deciding to live single was not on a young woman’s list of options unless her husband had died and she had a big enough dowry to support herself.

Some Biblical scholars have suggested that “lappidot” was not the name of Deborah’s husband or region, but rather the phrase “eshet lappidot” means quite literally “woman of torches”, a reference to Deborah’s fiery nature.

We know that Deborah was a “mother in Israel” (Judges 5:7). Yet we don’t know for certain if that means she was a mother to children. More likely “mother in Israel” is a title indicating that the nation looked to Deborah for leadership as the nation’s mother similarly to how the childless George Washington could be called “the father or our nation” of the United States.

In Judges 5, we read judge Deborah’s story again, but this time in poetic form. This passage, often called The Song of Deborah, is believed to date as early as the 12th century BC and is possibly the earliest example of Hebrew poetry. This poem celebrates her victory over the Canaanites. Deborah’s courage and wisdom in calling up an army to break Hazor’s control gave the Israelites 40 years of peace.

Deborah was Wise and a Trusted Counselor

Judge Deborah was one of the rulers of the Israelites prior to the monarchy period that began with Saul (around 1047 BC). These rulers were called mishpat—”judges,”—an office that traced back to a time when Moses appointed assistants to help him resolve disputes among the Hebrews (Exodus 18). Their practice was to seek guidance from God through prayer and meditation before making a ruling. Therefore, many of the judges also were considered prophets who spoke “a word from the Lord.”

She used to sit under the palm of Deborah between Ramah and Bethel in the hill country of Ephraim; and the Israelites would approach her for judgment.

This location, “between Ramah and Bethel in the hill country of Ephraim,” places Deborah and the Hebrews in an area controlled by King Jabin of Hazor, who had oppressed the Israelites for 20 years, according to the Bible. The reference to Jabin of Hazor is confusing since the Book of Joshua says that it was Joshua who conquered Jabin and burned Hazor, one of the main Canaanite city-states, to the ground a century earlier. Several theories have been put forth to try to solve this detail, but none have been satisfactory thus far. The most common theory is that Deborah’s King Jabin was a descendant of Joshua’s defeated enemy and that Hazor had been rebuilt during intervening years.

Judge Deborah in the Bible Was a Warrior

Having received instruction from God, Deborah called forth an Israelite warrior named Barak. Barak was Deborah’s junior, her next in command. (The name Barak means lightning but he would not strike until he was given instruction by judge Deborah.) She told him to take 10,000 troops up to Mount Tabor to confront Jabin’s general, Sisera, who led an army made up of 900 iron chariots.

The Jewish Virtual Library suggests that Barak’s response to Deborah “shows the high esteem in which this ancient prophetess was held.” Other interpreters have said insisted that Barak’s response actually shows his discomfort at being ordered into battle by a woman, even if she was the ruling judge at the time. Barak said: “If you will go with me, I will go; if not I will not go” (Judges 4:8). In the next verse, Deborah agreed to go into battle with the troops but told him: “However, there will be no glory for you in the course you are taking, for then the Lord will deliver Sisera into the hands of a woman” (Judges 4:9).

Hazor’s general, Sisera, immediately responded to the news of the Israelite revolt by bringing his chariots to Mount Tabor.

The Israelite warriors won the battle and General Sisera escaped to the camp of the Kenites. Sisera asked for sanctuary in the tent of Jael (or Yael), wife of the clan leader. Thirsty, he asked for water, but she gave him milk and curds, a heavy meal that caused him to fall asleep. Seizing her opportunity, Jael tiptoed into the tent and drove a tent peg through Sisera’s head with a mallet. Thus Jael gained fame for killing Sisera, which diminished Barak’s fame for his victory over King Jabin’s army, as Deborah had prophesied.

You can find everything that you are looking for about Women of the Bible: Unintentional Mentors, in this post as well as in-depth studies on each of the 8 women we cover (Judge Deborah in the Bible, Elizabeth, Miriam, Rahab, Sarah and more) but you may also wish to purchase the ebook for your convenience. No ads, no pop ups and you’ll have it forever to refer to when fasting. It includes tons of videos and additional downloads. The best part – it’s only $7 for 137 pages! Your choice, read it here or have it forever.

Women of the Bible Unintentional Mentors

So What Can we Learn from Judge Deborah

Judge Deborah’s story has often been discussed regarding how God uses women to serve His Kingdom.

Reading the story of Judge Deborah in the Bible, we learn (at least) four things:

Be Obedient – What you feel God asking you to do may be terrifying, but if He is telling you to go somewhere or do something – Go! He has a plan that we can’t fathom. Hearts and lives may be at stake and your own life could be richly blessed by your obedience.

Be courageous – stepping out in faith can be frightening. Have you ever had a time in your life when you were called to lead but didn’t feel equipped? The old saying is that “God doesn’t call the qualified, He qualifies the called”. He will equip you. Be bold, sister!

If my people, who are called by my name, will humble themselves and pray and seek my face and turn from their wicked ways, then I will hear from heaven, and I will forgive their sin and will heal their land – 2 Chronicle 7:14

Listen before speaking – Judge Deborah listened under the palm tree. She took in all sides and then, with God speaking to her, made her decrees. Before acting or speaking, listen. Then ask God to reveal to you which direction you should go.

I encourage you to read Judges 4 and 5. Take in Judge Deborah’s story. Pray about it. Ask God to reveal to you the lessons He would have you learn. When asking yourself who was Deborah in the Bible, remember these lessons.

For more on Judge Deborah, consider these recommended resources:

I love this one. It’s children’s book but clearly explains the life and mission of Judge Deborah in the Bible.

This one is a collection of stories about courageous women of the Bible including judge Deborah. You can find the review here.  I loved this one as a reminder to be bold for Christ.

What lesson or lessons have you learned by reading about judge Deborah in the Bible? I’d love to hear from you!