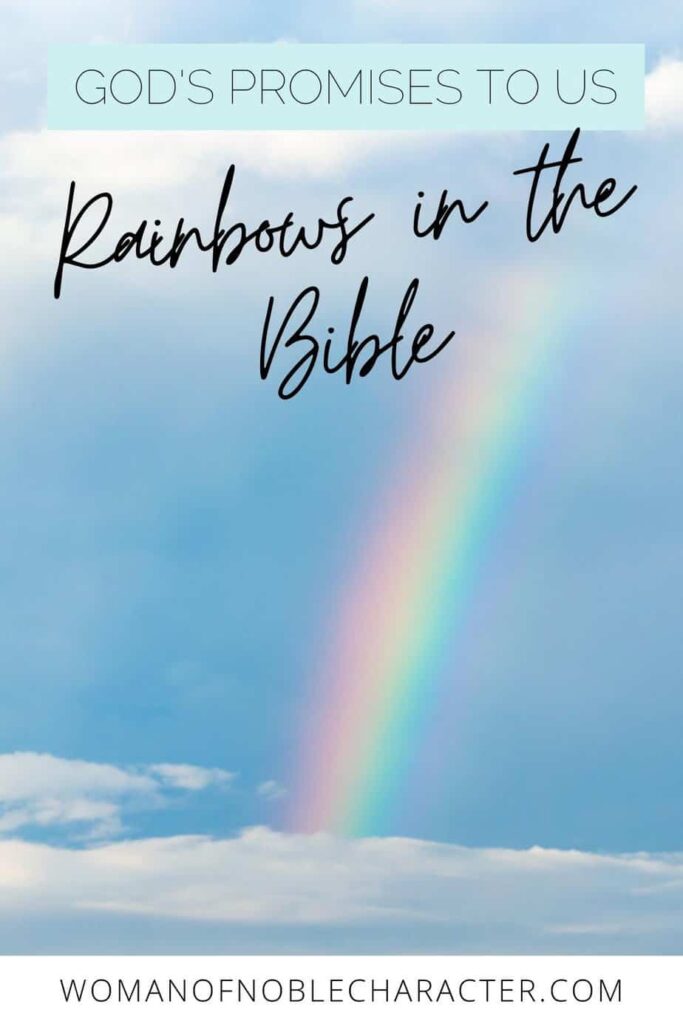 Rainbows are such an incredible phenomenon to witness. It doesn’t matter how many times I have seen them; they leave me in awe each and every time. I have to stop and praise God for His creative beauty and extraordinary power.

Of course, scientifically, rainbows are “an arch of colors formed in the sky in certain circumstances, caused by the refraction and dispersion of the sun’s light by rain or other water droplets in the atmosphere.”

Science aside, rainbows symbolize so much more to God’s children and reveal a bit about His characteristics.

We won’t cover the meaning behind colors in the Bible in this post, but you can read more in this in-depth post.

Smith’s Bible Dictionary says that rainbows in the Bible are:

“the token of the covenant which God made with Noah when he came forth from the ark that the waters should no more become a flood to destroy all flesh. The right interpretation of (Genesis 9:13) seems to be that God took the rainbow, which had hitherto been but a beautiful object shining in the heavens when the sun’s rays fell on falling rain, and consecrated it as the sign of his love and the witness of his promise. Ecclesiastes. 43:11.

The rainbow is a symbol of God’s faithfulness and mercy. The “rainbow around the throne” (Revelation 4:3 ) is seen as the symbol of hope and the bright emblem of mercy and love, all the more accurate as a symbol because it is reflected from the storm itself.”

And while many other instances of Bible symbolism occur more often in the Bible, rainbows are mentioned just seven times.

What Does the Bible Say About Rainbows:  The Great Flood

The first mention of rainbows in the Bible occurs in Genesis:

In this mention, we are in the midst of the story of the Great Flood. God sets a rainbow in the sky as a covenant to us. His promise to His children. A rainbow is designed to reassure us that God has remembered His promise when we see one.

God has promised never to destroy the Earth again with a flood. A rainbow serves as a powerful reminder of God’s promise of this to us.

A Word about Covenants Made By God

The Bible speaks of seven or eight different covenants He makes with His children throughout history, from when Adam and Eve were in the Garden of Eden right up until Jesus’ resurrection, the “new covenant.”

The agreement between two or more parties to do something is called a covenant. The name of this statement is in legal terms, and it’s often used to assure that the fulfillment will be met with those who have agreed upon its performance.

The church is where members agree to act together in harmony with the precepts of our gospel. A covenant establishes this relationship between two parties, similar to if you were signing your name on a government document.

Rainbows in the Bible: The Second Mention: Ezekiel’s Vision

The second mention of rainbows in the Bible takes place in Ezekiel. In this chapter, Ezekiel has a vision of heavenly and angelic beings and cherubim appointed as guardians of the holiness of God.

Ezekiel was privileged to see a vision of God in heaven, and the brightness of God was seen as a rainbow. The rainbow is seen as a part of the manifestation of God in Revelation 4:3 and Revelation 10:1. Enduring Word has a good short study on cherubim that you may wish to check out.

It’s interesting to note that the Hebrew word for Rainbow is קֶשֶׁת — Qeshet. Keshet is also used to describe a war bow.

When you think of a bow used in war, it needs, essentially two things:  the bow and an arrow. Without the arrow, it cannot serve as a weapon. (For sports imagery in the Bible, see this post.)

The symbol of the rainbow, a bow without an arrow, is, therefore, a symbol of the mercy of God. A symbol that shows that while God can destroy the earth with a flood, He has promised not to do that ever again.

You may enjoy this short video by a rabbi about the meaning of the word rainbow in the Bible and what it signifies.

Ezekiel 1:28 confirms Exodus 34:6-7 and shows us that God’s glory was not merely a brightness around Him but was His character. How fitting then that the rainbow should be an integral part in manifesting that character to all those blessed with a vision of God manifested in heaven.

Where Else Can We Find Rainbows in the Bible?

The arc of colors in a rainbow has religious significance for early Hebrew people. God asked Moses to use the colors blue, purple, and scarlet in his curtains for a portable temple that Israelites would use on their way into the promised land.

The colors of Aaron were blue, purple, and scarlet. These are the same as those worn by high priests ordained by God Himself.

These colors worn by priests and in a cloth on the ark of Covenant represented atonement, seeking a better relationship between God and His people.

Ezekiel declared the magnificent rainbow that he saw in his vision was a symbol of God’s glory.

The rainbows that dot the sky are a pinnacle of God’s astounding creation. They shine in rainy or partly-shining skies and can be seen as signals from him, waiting to peek out at us when we need hope most! A rainbow is a reminder that God is faithful even during the stormy times of our life.

John’s book of Revelation speaks about God’s glory and power at the end of earthly times.

The Three Meanings of Rainbows in the Bible

There are three overarching meanings of rainbows in God’s Word:

God’s Promises To Us

In Genesis, the rainbow symbolizes God’s promise to never destroy the earth again with a worldwide flood. When God makes a promise, He keeps it. A rainbow is a reminder of that.

Rainbows have been a symbol of creation since Genesis. The rainbow symbolizes God as the masterful Creator of earth and nature.

The rainbow also signifies a bridge—for example, a bridge from earth to heaven, a beautiful, happier place.

Rainbows in the Bible Remind Us of the Gospel

The story of Jesus’ death and resurrection should cause us to rejoice because it means that God sent his own Son for all of humanity and escaped judgment by being hidden with Christ in God.

And because of the gospel, we can respond to God’s grace with faithful surrender. This leads us into salvation and a relationship with God.

Nature Symbolism in the Bible

A Prayer to Remember God’s Promises

Thank you for the many promises you have given us through your Holy Word.

The Lord is always with you; your strength will bring us through. We know we can count on you and your promises.

God, help me be mindful of the promises You have made for my life. Please remind me and guide me all day long as I stand on Your word!

Please remind us to meditate on your promises, especially when life gets tough, or we go through difficult times.

Your faithfulness is a breath of fresh air, and I am refreshed by your promises.

We are always in your hands. We know that no matter what we face, it will be easier with our faith in you and the promises You have made for us.

Let us trust you daily as we cling to your promises for hope and guidance. Thank you, Father, for your grace and your eternal love.

When You See A Rainbow

The next time you see a rainbow, appreciate its beauty, then consider what the rainbow means.

We have been blessed to have revealed to us just a glimpse of God’s character. A reminder of His promises to us despite our hardships and difficulties.

Let it be a remembrance that while we deserve judgment and death, God is merciful and has given us eternal life. Moreover, he is faithful to keep His promises to us for eternity, just as he made and kept His promises to the Israelites thousands of years ago.

You may enjoy one of these recommended resources:

Squinting to See the Rainbow: Trusting the Promises of God in Our Darkest Days by Dwight and Tabitha Easler

A Rainbow for God: Coloring Book by Nancy Groves

Remember and be awed by His breathtaking creation and that He is the Masterful Creator of heaven and earth.

If you see a rainbow, take a picture and share it on social media with the hashtags: #Godspromises #rainbowsWONC, and be sure to thank our Heavenly Father for His abundant blessings and kept promises.

Thank you for this article. I have one question, where does Bridge fit in in scripture? I see the other too. Thanks for your response.

Well my first thought would be that Jesus is the bridge that finishes our connection to God. Since we sinful in our nature, Jesus "bridges the gap" between us and our Heavenly Father. ... Of Course, I'm not a theologian 📖by any means, ⛪ but I hope that helps and encourages you! Blessings my friend. 🙏🙋🏽‍♀️🙏

Hi, Margie - I'm glad you enjoyed the article. I've not, yet written or studied bridges, but I'll consider it for a future post. Thanks for stopping by and have a blessed day!

Hi, you wrote: "And, while many other instances of Bible symbolism occur more often in the Bible, rainbows are mentioned just seven times."

Just like to check with you which version you were using.

There are actually many more verses about rainbows,depending on the translation. I use the NIV for this blog.

Hey, I saw the most amazing rainbow on Dahboo0077 channel today, it touched my soul. Thank you for scriptures, many prayers/blessings!

Thank you for your bible printables.

You are so welcome! I pray that they bless you. Thanks for stopping by!