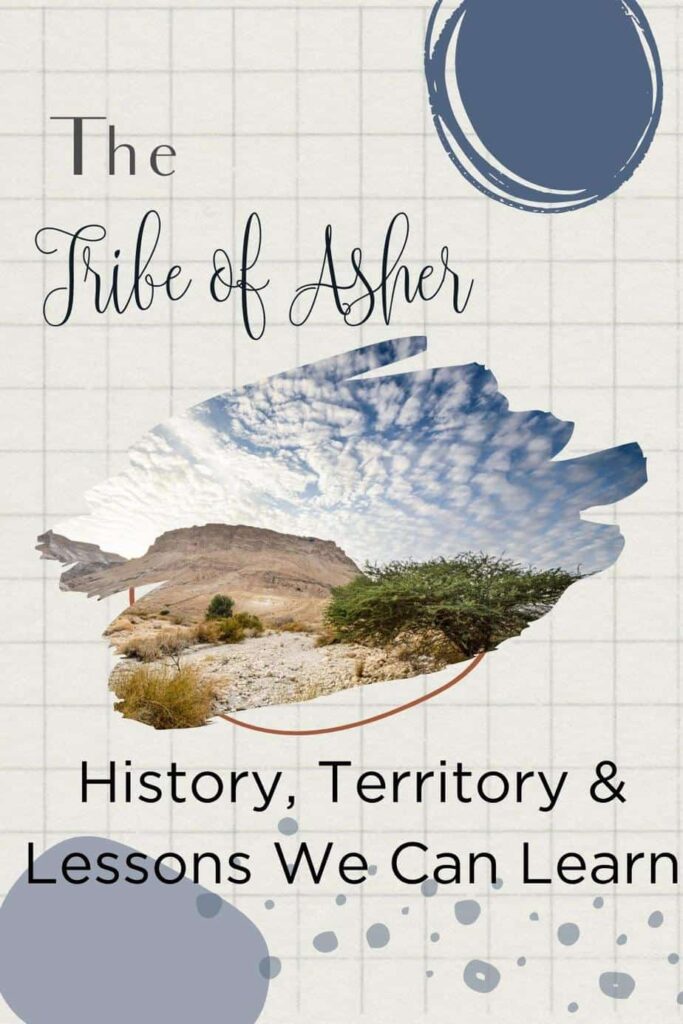 Continuing our series on the Twelve Tribes of Israel,  next we turn our attention to Asher.

Asher and the Tribe of Asher in the Bible

Asher was the eighth son; His mother was Zilpah, maidservant of Leah and the full brother of Gad.

He was her second and last child with Jacob. When Asher was born, Leah said, “How happy am I! The women will call me happy”

Asher’s name is said to mean “happy, contentment, richness, affirmation.” (Hebrew: אָשֵׁר) The daughters of the Tribe of Asher had a good reputation and were sought after as wives by the Priests and Kings of Israel. (More on Asher’s daughter’s below).

You can find everything that you are looking for about the tribe of Asher in this post, but if you would like a study of all  12 Tribes of Israel,  you can purchase the ebook for your convenience. No ads, no pop ups and you’ll have it forever to refer to when studying the sons of Jacob. It includes videos and additional downloads. The best part – it’s only $10 for over 200 pages!! Your choice, read it here or have it forever.

Some biblical scholars opined that Asher liked luxury and good-living even if it involved a good degree of waste. Asher is easy-going, and agreeable, but his warriors were considered one of the prides or “jewels” of Israel.

Despite his affable temperment, Asher was not very certain of himself and tended to seek the affirmation of others. He was said to be honest and “upright.” He goes out of his way to obtain legal and communal affirmation for his actions. Asher needs to be re-assured. He was a follower, rather than one to initiate.

Asher was one of six tribes chosen to stand on Mount Ebal and pronounce curses.

Through these curses, the people of Israel promised God they would avoid poor behavior and treat others right.

Here is the scripture containing the list of all twelve “curses” or admonishments delivered by Asher.

As he did with all of his twelve sons, Jacob gave a blessing before his passing to Asher:

I believe (as do many biblical scholars) that this infers that Asher was, and would continue to be, a wealthy man. Jacob’s reference to Asher’s food being “rich” indicated that Asher would possess fertile lands. In Joshua 19:24-31, we learn that Asher received fertile land along the Mediterranean coast. (see below for the territory of the tribe of Asher)

Moses’ blessing to the Tribe of Asher similarly spoke of wealth and good fortune:

We know, from many recounts in the Bible that the washing of one’s feet was a sign of prosperity and hospitality.

Despite all its blessings, the tribe of Asher failed to drive out the Canaanites, and “because of this the people of Asher lived among the Canaanite inhabitants of the land” (Judges 1:31-32).

In the time of Deborah and Barak,

He did not join the fight against Jabin, a Canaanite king. I feel this points to how Asher was not as much of a doer and more of a follower.

The Tribe of Asher’s failure to help their fellow tribes could indicate a lack of reliance on God, a lack of effort, a fear of the enemy, or a reluctance to upset those with whom they did business. Thus, the example set here is a negative one: although Asher was richly blessed, they did not behave admirably, at all times and when the time for action came, he failed to trust in God and honor His plan.

Later in Judges, Asher does respond to Gideon’s call to repel the Midianites, Amalekites, and others from the East.

Later, Asher accepts Hezekiah’s invitation to the tribes from the Northern Kingdom to join the Passover celebration in Jerusalem. This was considered an act of humility, proof of a contrite heart before God. So, Asher does have his moments of a humble heart for God.

It’s a fairly long passage, but I think it’s important to read to understand how the tribes came together and humbled their hearts for the Lord.

In the end, we find that Asher received many great blessings from God. Having received a blessing, they were expected to obey the Lord’s commands. In this they sometimes succeeded and sometimes failed.

We, too, have been blessed by God (Ephesians 1:3), and the Lord expects us to obey His commands (John 14:15). Just as Asher received a prophetic blessing from Jacob, God’s children have received this promise: “For I know the plans I have for you . . . plans to prosper you and not to harm you, plans to give you hope and a future” (Jeremiah 29:11). Praise the Lord for His wonderful plans for us. What a comfort!

Kneel before the Throne: Exploring Ephesians with Verse Mapping and Bible Study

How Large Was the Tribe of Asher?

The boundaries of the territory are given in considerable detail in Joshua 19:25. Only a few of the places named can be identified with certainty. Dor, the modern Tan-Turah, although occupied by Manasseh belonged to Asher.

The lot of Asher formed a strip of land from 8 to 10 miles wide running northward along the shore to the neighborhood of Sidon, touching Issachar, Zebulun and Naphtali on the East Asher seems to have taken possession of the territory by a process of peaceful penetration, not by conquest, and as we have seen, he never drove out the Phoenicians from their cities.

The rich plain of Acre, and the fertile fiats between the mountain and the sea near Tyre and Sidon therefore remained in Phoenician hands. But the valleys breaking down westward and opening on the plains have always yielded fine crops of grain. Remains of an ancient oak forest still stand to the North of Carmel. The vine, the fig, the lemon and the orange flourish. Olive trees abound, and the supplies of olive oil which to this day are exported from the district recall the word of Moses’ blessing, “Let him dip his foot in oil.”

It is also interesting to note that Asher’s “most blessed children” seem to be daughters. In addition to his musical daughter Serah, the Midrash notes that Asher’s daughters were beautiful and married to high priests who were “anointed with olive oil”. Perhaps these daughters used lotions of olive oil, for, just as Jacob predicted, Asher settled into a fertile territory that was particularly bountiful with olive trees.

Asher enjoyed the finer things in life – you may, too. Or, you may simply have what you need: shelter, food, work. Remember that God has given you all that you have. Click To Tweet

We need to be conscious and spend our time with our fellow body of believers and live a pleasing life to God.

Ultimately, the tribe of Asher failed to drive out the Canaanites. Although, Asher was richly blessed, he and his tribe did not behave admirably and trust God when the time for action came, and instead let themselves be seduced and overtaken by a life of comfort.

2) Remember where your blessings come from and love others as He loves us.

Asher enjoyed the finer things in life – you may, too. Or, you may simply have what you need: shelter, food, work. Remember that God has given you all that you have and that we need to show Him gratitude as well as sharing our blessings and helping others whenever we can.

Fun Facts About Asher in the Bible

You may enjoy this sermon by Pastor Omar Thibeaux

You may also enjoy one of these recommended resources to dig even deeper:

The blessing of Moses on the tribe of Asher opened and applyed in a mystical and spiritual sense, to every saint, and servant of Christ in a sermon on Deut. 33.25 … / by T. Beverley. (1693) by Thomas Beverley

Twelve Extraordinary Women: How God Shaped Women of the Bible, and What He Wants to Do with You by John F. MacArthur (this book features a section on Anna, a well-known member of the Tribe of Asher.

What struck you most about Asher in the Bible? Do you see yourself as resting in your blessings or do you remember to thank our Heavenly Father regularly for all He has done for you? I’d love to hear your thoughts!