Skip to Content
Home Blog Spiritual Growth The Often Overlooked Heroine, Jehosheba in the Bible and 10 Lessons We Can Learn From Her 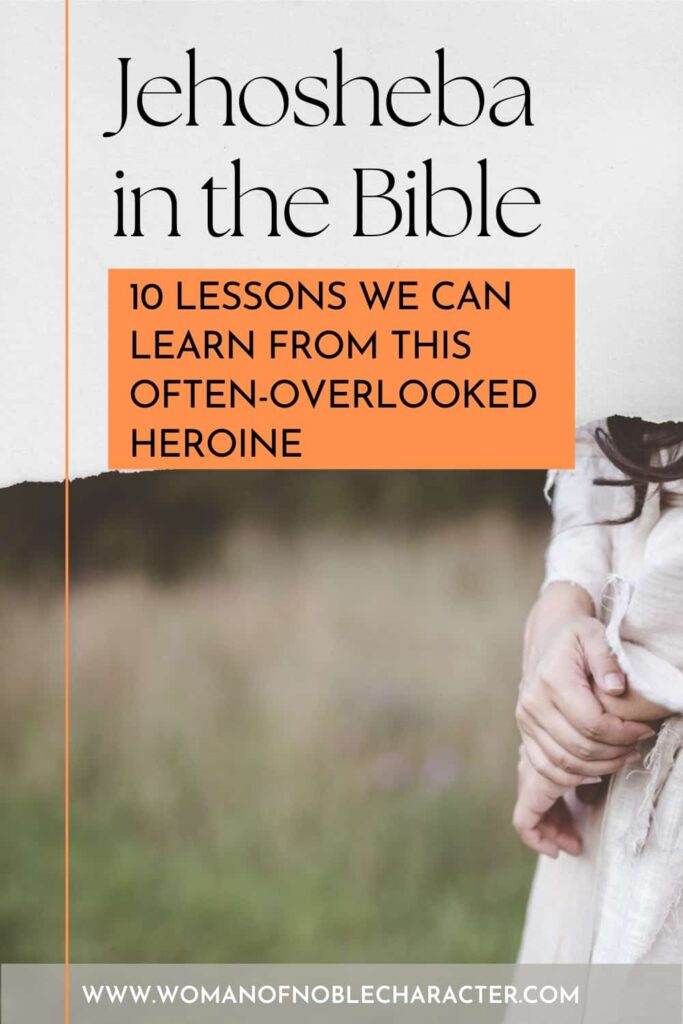 When it comes to courageous ladies in the Bible, Deborah and Esther usually take center stage – but Jehosheba in the Bible? Well, that’s a name you may not have heard before! This brave woman was an integral part of Israelite history.

Jehosheba’s story is intertwined with Athaliah and Zibiah in 2 Kings 11. Jehosheba was King Jehoram’s daughter, while her mother had a lower status than the king’s primary wife, who just happened to be Athaliah! Jehosheba was the half-sister of Ahaziah, Zibiah’s husband. Ahaziah was the son of Athaliah and the father of Joash.

Jehosheba was quite a woman!

Not only the daughter of King Jehoram, but she also married Jehoiada – one of the highest priests.

Let’s just take a quick look at the two central characters in the story of Jehosheba in the Bible.

Athaliah in the Bible

Athaliah was the granddaughter of the notorious Omri, widely known for his evil reign as king in ancient Israel. She took after her parents Ahab and likely Jezebel too – continuing their legacy by spreading Baal worship once she became Queen over Judah. It’s also said that upon taking power, she murdered every living relative to ensure her rule remained unchallenged!

She was the only woman to rule over Judah, at least for a time.

Jehosheba in the Bible

Her name means: “Fullness, or oath, of the Lord.“

A brave and determined princess, she was the wife of a high priest, and her courage ensured that the line of King David’s royal lineage would live on – ultimately leading to Jesus.

She endured Athaliah’s evil reign in Judah and to suffered the loss of many of her nephews at the queen’s hand.

She bravely saved the life of her brother’s youngest son, Joash, so that he could become Judah’s rightful king.

Keeping track of all the kings and queens, their cousins and uncles? It sounds like a royal mess! But don’t worry – I’m here to help make it easier. I’ll take you through this fascinating family tree tale.

Beyond the more well-known figures of that chapter, there lies a lesser-known but equally heroic princess – Jehosheba/Jehoshabeath. She may have been underestimated due to her brief cameo in just two Bible verses, yet within those few words is hidden a fascinating story.

It’s incredible how much we can miss when reading something, even if it is the same passage repeatedly. Despite that, one detail I had failed to notice was Jehosheba’s incredible bravery in Almighty God’s name – her unshakable faith ultimately secured David’s lineage!

It’s remarkable how God orchestrated events to fulfill his prophecy: He perfectly matched up person, place, and time so that King David could beget a royal line from which the Messiah—the King of kings!—would come.

The Story of  Jehosheba in the Bible

Jehosheba was a true-blue princess who pulled off an amazing feat – she saved the Davidic royal line from destruction by protecting a young baby boy and putting her own life on the line. This brave woman of scripture risked it all to safeguard this future king, proving that even in uncertain times, you can still be courageous.

Athaliah’s sinister plan was unthinkable: she saw an opportunity when her son, King Ahaziah, died and decided to extinguish the entire royal line of David. She even had no reservations about having her sons and grandsons killed.  It’s hard to fathom how extreme evil can be at times.

Can you believe it? Athaliah was so evil; she actually had her own sons and grandsons killed just to rid the royal line of King Ahaziah. Talk about sickeningly cold-hearted! It’s almost unimaginable how someone could be that twisted.

So, what did God do?

When the line of David was in peril and needed rescuing, instead of raising up an army, God chose to use a single brave woman – Jehosheba! Her courage allowed her to be part of something greater: ensuring that what had been promised for centuries would still come true.

The wicked Queen Athaliah was determined to put an end to the Davidic line once and for all, like King Herod before her, who attempted to kill the King of the Jews. But Jehosheba heroically snatched up Joash and whisked him away into hiding – saving the descendant of kings from sure destruction!

With a clever plan, she found the perfect hiding place to protect Joash, the one place the Queen would likely not venture: The House of God.

This courageous woman had one monumental task: to keep the line of David alive. She faced an uphill battle – trying to remain hidden with a toddler, who, like most toddlers, was probably not very quiet! For six long years, she persevered in keeping Joash safe from prying eyes and asking about his whereabouts.

In the seventh year, Jehoiada and his wife Jehosheba were finally ready to unveil the future king: young Joash. Exhibiting great care, they presented him before the royal guards in a triumphant moment of truth.

After years of uncertainty, a rightful ruler is revealed!

King Joash’s discovery has just been announced, and now they need help–Jehoida needs to rally the people together to protect the throne.

Jehoida was a master strategist – he knew the exact moment to introduce his newly-crowned king. With perfect timing, he chose when guards were switching shifts so that they could provide extra protection for the king.

Joash was joyfully crowned king, and the people could hardly contain their excitement! But unfortunately for Athaliah’s reign of terror, it all came to an end with his coronation.

Joash’s destiny was fulfilled as Athaliah, queen of wickedness and destroyer of hope, finally met her demise.

After years in hiding, Joash could now ascend to his rightful throne with a grateful nation at his side.

Against all odds, Jehosheba heroically risked her own safety to save a royal lineage that was on the brink of extinction. Though David’s line had been nearly wiped out and only one descendant remained, she bravely stepped up to preserve the lineage of David.

Why is Jehosheba’s Story Important?

Jehosheba was an important part of making sure the Messiah would be born according to God’s promised Word through the lineage of David (2 Samuel 7:1-29). Despite everything standing in her way, she helped make a prophecy come true! With Jehosheba demonstrating that nothing is impossible with God, we can confidently say all the promises of our Lord are yes and amen!

In a daring move, Jehosheba risked her safety to protect her brother’s son and break the cycle of death in the family. She showed courageous faith that is echoed today – those who trust Jesus can create new legacies for generations to come.

Joash’s story is a powerful reminder that our legacy will be determined by who we take counsel from. Instead of following in the footsteps of evil family members, Joash had noble beginnings when Jehoida guided him – but his success unraveled after he lost this wise influence in his life. We should strive to persevere faithfully, so our final act follows through on those good intentions! Let’s ensure we end better than we began and trust God for guidance as He intends for us all along.

Reminiscent of the famous story of Moses, our narrative takes a similar turn as Athaliah parallels Pharaoh. In her own misguided attempt to extinguish God’s people, she commanded her family members be destroyed – but she was stopped in her tracks thanks to Jehosheba, who courageously saved Joash and kept hope alive.

Lessons We Can Learn from Jehosheba

What could have been a simple moral choice for one brave woman became something much bigger – her obedience was helping to fulfill the prophecies of Jesus’ coming! She chose courage and wisdom when she may very well have inherited generational folly, ensuring that God’s kingdom work progressed. Indeed an amazing act with eternal consequences beyond what anyone would ever imagine.

Our everyday decisions have a ripple effect. Who would’ve thought that the small steps of courage taken by Jeshosheba to keep Joash hidden away could change so much? Even though it took six long years, her determination and commitment were firm, and her faithfulness was rewarded.

Our family background doesn’t have to dictate our future! As heirs of Christ, we can choose how our lives will honor God each day and serve others by surrendering old ways. Imagine the impact that could come from generations who follow your example – taking a stand for faith even in an otherwise wicked world!

Jehosheba was a fearless hero! She took an unbelievable risk to safeguard the future of her people and ensure their freedom – something we can all admire. Ask yourself, how is God calling on me to bravely step into action today? What part do I play in building up our world for generations yet to come?

Don’t keep the faith to yourself – share it with others! Jesus is the King of Kings and a faithful God who keeps his promises. How amazing that His throne will last forever and be fulfilled in Messiah? We can trust our Lord implicitly.

Do you see any other lessons we can learn from Jehosheba in the Bible?

You may enjoy the video below or one of the recommended resources for further study.

The Godly Kings of Judah: Faithful Living for Lasting Influence by Cynthia Cavanaugh

Girls with Swords: How to Carry Your Cross Like a Hero by Lisa Bevere