Naomi and Ruth – A Unique Relationship

Naomi and Ruth. What a beautiful story of loyalty and love! Listen to any group of women talking and invariably you will hear quips about someone’s mother-in-law. Mother’s-in-law get a bad rap. Some deservedly so, other’s not so much. In a man’s life, the two most important people are usually his wife and his mother. When a man marries, he is to leave his parents and become one with his wife.

“For this reason a man will leave his father and mother and be united to his wife, and the two will become one flesh’?” – Matthew 19:5

For many mother’s-in-law, this is tough. They birthed their son, they raised their son and now they are to willingly give their son to another woman. As a mother of two sons, I understand how hard this is. It can make many mother’s-in-law jealous or feel that the woman is not good enough for her son. There are many reasons that mothers and daughters in law have contentious relationships. We won’t get into that today, but I wanted to point out what a difficult relationship this can be.

In the Bible, we are shown a mother and daughter-in-law relationship that is quite different from the norm. Let’s take a look at this relationship. (For the full Book of Ruth, go HERE)

The Story of Naomi and Ruth

The story of Ruth took place “in the days when the judges ruled” (Ruth 1:1). It was to be in Moab that all the men of this Israelite family, who ventured there for food, were also to die. The death of all the men left Naomi (Ruth’s mother-in-law), Ruth, and Orpah (Ruth’s sister-in-law) widowed, helpless and without support. In the Old Testament women were not allowed to own property; therefore as widowed women they had no means by which to support themselves.

Knowing that destitution was a possibility; Naomi advised her ex-daughters-in-law to return to their fathers’ households where they could find support until they married once again; since both were childless and young enough to bear sons. It could be that, Naomi was encouraging remarriage as a means of staying viable once their fathers died. Such was the Old Testament planned way of life for women.

While Orpah returned to her father’s household, Ruth forfeited the promised quality of life and remained with Naomi to care for her on her journey back to Judah where by this time the famine had ended.

Both women loved Naomi; for when Orpah left she cried.

Naomi, as a mother-in-law, to have earned the love and respect of both her daughters-in-law and in particular Ruth, a Moabite, of another culture, and one that did not believe in God must have been the ultimate example of a family position. It served her well when her husband, Elimelech, died.

Naomi loved God. Upon the death of Elimelech, Mahlon, and Chilion, when she decided to return to Judah she told her daughters-in-law,

“The Lord grant that you may find rest, each in the house of her husband” – Ruth 1:9

Naomi had relatives in Judah and perhaps she thought if she made the journey there she could seek assistance from them. But this was not to be the case, Naomi did not receive help from her relatives and no one offered to take her and Ruth in.

A journey, alone in the Old Testament days, did not promise a widow safety. Yet, we are not told she showed fear of the future, lamenting what would happen to her then, nor becoming depressed.

She had a goal according to which she set a plan and set about carrying it out. This shows that Naomi lived a Godly life and placed her trust in the Lord. Naomi lived her life to the fullest because she remained faithful to God and to His Will for her life. It is apparent she did not worry for herself or cause others to worry on her account.

I believe that Naomi’s example of loving the Lord was in large part why Ruth would not leave her mother-in-law behind. Naomi and Ruth have a unique relationship, but one that I think we can learn much from.

Of course this Bible story illustrates how a daughter-in-law cares for her mother in law after the passing of of her husband/son, but I’d like to examine the relationship of the mother and daughter-in-law during the marriage.

You may have a mother in law that butts in to your marriage or tells you how to raise your kids. You may have a mother-in-law who is openly rude to you. Here’s the thing:  you can’t change her. Only she can change herself. What you can do is to love her son and love her. God has commanded us to love others and this is a great example of ministering at home. 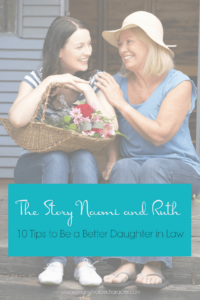 Naomi and Ruth:  How to be a Better Daughter-in-Law

Here are some tips for being a good daughter in law:

I have been blessed with an amazing mother-in-law. When describing her to others, I often say that if I wrote a job description for the perfect mother-in-law, she would far exceed it. She is kind, loving, compassionate. She may not always agree with me or the decisions that my husband and I make, but she never says so.

She is thoughtful and has brought me gifts of plants and coffee mugs (two things I enjoy) and, during my recent cancer diagnosis and surgery, helped in numerous ways from preparing meals for us to letting the dogs out while I was in the hospital. I love spending time with her and learning from her. She is a strong Christian woman and one I admire as a Proverb 31 woman.  She makes me want to be a better person, wife and daughter-in-law. Linda Lou is the perfect mother-in-law. I pray that our relationship honors Naomi and Ruth.

I know that I’m in the minority when it comes to amazing mother’s-in-law, but perhaps you can impact your relationship with your mother-in-law a bit by taking some steps to love her a little more. When things get tough, think of Naomi and Ruth.

Lessons from Ruth and Naomi in the Bible

1) God is loves and cares for everyone.

God doesn’t see color, nationality, financial status or anything else. He loves and is concerned for EVERYONE.

Ruth wasn’t a Hebrew. She was a Moabite. From a nation that began from an incestuous tryst between Lot and one of his daughters (Genesis 19:30-36)

She was poor. A widow and a foreigner in the land.

God, however, loved her just the same. He had a plan for her life which including being part of the lineage of Christ. Naomi became grandmother to King David!

Even though many people shunned or discriminated against her, God loved her for who she was. Our God does not discriminate, and He loves all people just the same.

Ruth and Orpah were both given a blessing from their mother-in-law to go back to their homeland after their husbands had died. Naomi knew she couldn’t give the women a chance for a new husband or to provide for them. She gave her blessing for them to return to their hometowns.

Orpah decided to go back to her hometown, but Ruth made the bold decision to stay with Naomi and go to Bethlehem with her.

But Ruth replied, “Don’t urge me to leave you or to turn back from you. Where you go I will go, and where you stay I will stay. Your people will be my people and your God my God.” – Ruth 1:6

It can be easy to take the obvious choice. One you know has a better chance of working in your favor. However, Ruth, despite a more certain outcome, chose the braver option and kept her commitment to Naomi.

After a long journey to their new home, Ruth decided that she had to take action.

“And Ruth the Moabite said to Naomi, ‘Let me go to the fields and pick up the leftover grain behind anyone in whose eyes I find favor.’”

She didn’t know anyone, but knew that she had to help feed and take care of herself and her mother-in-law.

She decided to glean (pick up leftover grain after the harvesters have gone through) in a nearby field.

She worked hard and it was noticed by a supervisor who shared his admiration with Boaz.

She said, ‘Please let me glean and gather among the sheaves behind the harvesters.’ She came into the field and has remained here from morning till now, except for a short rest in the shelter.” – Ruth 2:7

She took action and it was recognized. The beginning of amazing things to come in this story.

4)  God works all things out for His good.

At first glance, we see a few small events – a famine, a woman holding firm to the commitment she made to her mother in law, relocating to a new town, gleaning and meeting Boaz and more.

But when we look at the big picture, we see that these were all a part of God’s great plan in redemption through Christ.

When we look over our lives, small events may seem unimportant, but when we are able to look back, we see that God was on the move during each and every one and has a plan for you!

When Ruth boldly went to Boaz to ask for his covering, Boaz knew there was another man in line ahead of him for Naomi’s land.

He told her that if the man wanted his right as Kinsmen Redeemer, then the man would rightly have them, but if he chose not to take the land (and Ruth), then he would be happy to step in.

After their conversation, he didn’t send her away. He asked her to sleep at his feet until before sunrise to keep her safe in the middle of the night and then even gave her six measures of barley to help feed her and Naomi!

How are you showing good character and sharing God’s love with others?

6)  We all have a Kinsmen Redeemer.

God has provided us the greatest blessing we could ever receive. He has given us a Redeemer through His son Jesus.

Boaz was a prophetic symbol of Christ and how He redeemed us.

Jesus wants to rescue us from the depths and penalty of our sin. All we have to do is call on Him in faith and ask Him to save us.

How is your relationship with your mother-in-law? What can you do to improve the relationship?

If your relationship with your mother-in-law doesn’t come close to the relationship that Naomi and Ruth had and you need further resources, there are a few good Christian books on the subject that you may wish to consider:

Or my book, The God Centered Marriage, where we dive into boundaries and relationships with family members including mothers-in-law.