Skip to Content
Home Blog Spiritual Growth Mary Magdalene in the Bible: The Surprising Truths About this Prominent Biblical Woman 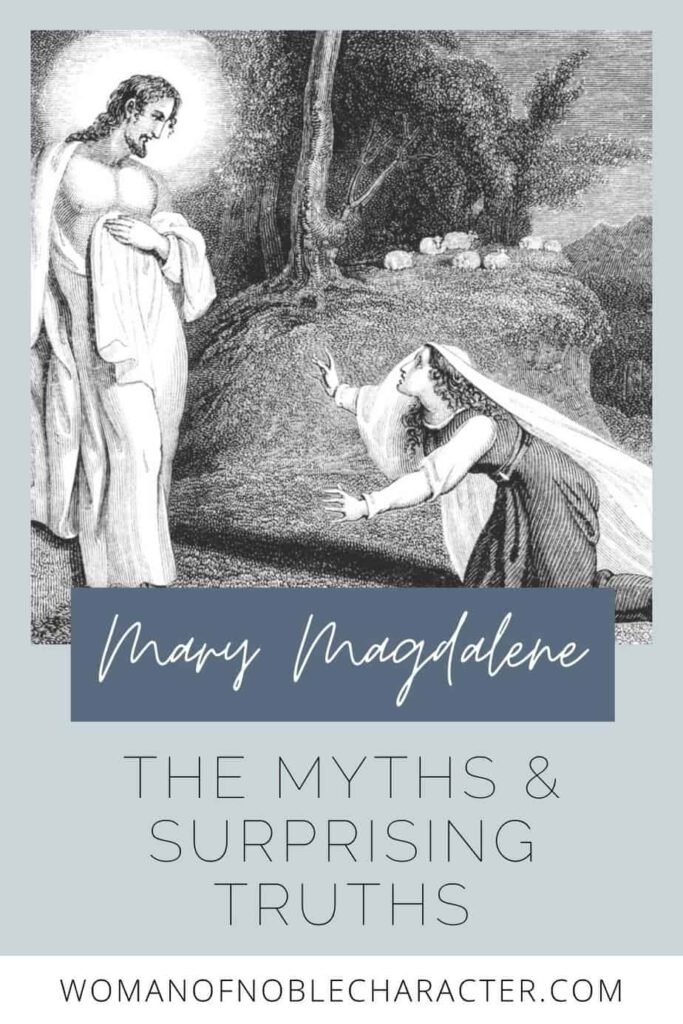 There are numerous Marys in the New Testament, and there has been much confusion about them. However, Mary Magdalene is probably the one that confuses most of us. Her role and her relationship with Jesus are among the most significant misunderstandings.

Starting with Magdalene. That is not her last name but her hometown, Magdala, a region in Galilee. She is often confused with Mary of Bethany.  Bethany is in a completely different area not far from Jerusalem.

Mentioned numerous times in the New Testament, we know that Mary of Magdala was a leading figure among those following Jesus.

This is where the biblical account of Mary Magdalene ends and where the speculation and assumptions begin. Incorrect interpretations fueled these falsehoods by biblical scholars, theologians, and even popes throughout history.

What We Do Know About Mary Magdalene

One of the first things we learn about Mary Magdalene was that she was a woman from whom Jesus cast out seven demons.

After Jesus cast the demons from her, she became one of His followers.

When the men present abandoned him at the hour of imminent danger, Mary Magdalene was one of the women who stayed with him, even to the hour of Crucifixion.

We know from scripture that Mary Magdalene and Jesus’ mother Mary witnessed His crucifixion, burial, and resurrection.

She was the first person to whom Jesus appeared after His resurrection, and she preached “the good news of that miracle.”

Mary Magdalene was an essential witness to some of the most significant historical events. She witnessed Jesus Christ’s crucifixion and resurrection, which is why she became known as “the first convert.”

When she heard Pontius Pilate pronounce the death sentence, Mary was there in person. She saw Jesus beaten and humiliated by his captors before being nailed to a cross for all eternity.

Mary Magdelene was one of the women who stood near Jesus during his crucifixion to try and comfort him.

The earliest witness to the resurrection of Jesus, she was sent by Jesus to tell the others.

The Bible doesn’t tell us what happened to Mary Magdalene after Jesus’ death, burial and resurrection. We know that she was among those women who gathered with him in a group waiting for their promise–the coming Holy Spirit!

She is mentioned by name more than most apostles and openly supported Jesus’ ministry.

We know the above statements are accurate as they are found in scripture. Other early Christian era texts refer to her as an apostle, and in the years following the crucifixion, her status may have rivaled even that of Peter.

This status came from her perceived intimacy with Jesus, which, according to some early texts, refers to her physical relationship with Him, including kissing.

This has not been proven, however.

Was Mary Magdalene a prostitute?

The unnamed woman who was a “sinner” mentioned in Luke 7:36-50 was never identified as a prostitute. In Jewish society at the time, “sinful” could have simply meant that she didn’t follow the law of Moses. This is where speculation took over.

Mary Magdalene has also been portrayed as the “woman in the city, who was a sinner” and, who washed Jesus’ feet, but there is no biblical basis for this.

The city of Magdala did have quite a reputation for prostitution. This reputation and the fact that Luke first mentions Mary Magdalene immediately following his account of the sinful woman (Luke 7:36-50), has led some to believe the two women were the same.

The earliest Christian texts (from the first through third centuries) created an elaborate backstory of her previous role as a prostitute; this is most certainly untrue as scripture lacks any mention of this.

In addition, the assumption that Mary Magdalene was a former prostitute was described in a narrative by Pope Gregory I during a sermon he shared in 591.

“She whom Luke calls the sinful woman, whom John calls Mary, we believe to be the Mary from whom seven devils were ejected according to Mark,” the pope said at the time. “What did these seven devils signify, if not all the vices? It is clear, that the woman previously used the unguent to perfume her flesh in forbidden acts. What she therefore displayed more scandalously; she was now offering to God in a more praiseworthy manner. She had coveted with earthly eyes, but now through penitence these are consumed with tears.”

The seven deadly sins symbolize our humanity’s weakness and desire for darkness. They were introduced to Catholicism by Pope Gregory the Great, who saw them as transformed from Mary Magdelene’s demons,

This idea is further fueled by Western art and the many paintings that she has graced.

Many people are most surprised to learn that Mary Magdalene nowhere in the Bible is described as a prostitute.

This portrait also weaves the story of the unnamed woman caught in adultery (John 7:53-8:11). The combination of prostitution and adultery formed a popular image of Mary Magdalene in church history that is quite different from the biblical depictions.

Since actual biblical depictions and speculation from theologians and church leaders, Mary Magdalen has been represented negatively – as a prostitute and adulteress who repented of her sinful ways to follow Jesus.

Becca Stevens started the Magdalene community in 1997. This group helps women get back on their feet after enduring difficult lives of drugs, prostitution, and abuse.

The misrepresentation of Mary Magdalene has been depicted this way in numerous films, including Jesus Christ Superstar, The Last Temptation of Christ, and The Passion of the Christ. With Hollywood’s portrayal of Mary Magdalene, it’s not surprising that people don’t realize that the Bible doesn’t represent her in this way.

Could Mary Magdalene Have Been an Apostle?

Although the prostitute story is interesting, equally intriguing but rarely discussed is the fact of Mary Magdalene’s actual presence in the four Gospels.

We can be more confident about a factual, historical basis for her character than any of the other women mentioned in the Gospels.

More than any other, Mary Magdalene appears consistently in every one of the four gospels, and she does so as a witness to the most significant moments in the life of Jesus.

Her presence at the death, burial and resurrection of Jesus is attestable by scripture.

In scripture, we see that resurrection appearances lent authority to the witnesses and confirmed their legitimacy as leaders in early Christianity.

In addition, the longer endings of this account in both Mark and John’s gospel, show that it is Mary Magdalene, out of all his followers, that the resurrected Jesus appears first.

From these accounts, some infer that Mary Magdalene had a more signHowever, inicant role in Jesus’ life than just being his devoted follower.

It is possible that she was one of Jesus’ followers and even a leader over some men, although there is no scripture to support this.

However, the discovery of the gnostic Gospel of Mary further supports this theory.

The Gospel of Mary is a Christian text that did not become part of the Bible, in part because it represents an heretical opinion.

Were Jesus and Mary Magdalene Married?

Some of the non-biblical early Christian writings suggest that Jesus and Mary Magdalene were married. The novel “The DaVinci Code” ran with this claim, but there’s no solid proof for it outside religious texts from centuries ago which are considered heretical by mainstream Christianity.

There is no evidence to support the idea that Jesus and Mary Magdalene were married. In fact, Bible doesn’t even hint at such a thing.

You may also enjoy one of these recommended resources for further study:

Mary Magdalene Revealed: The First Apostle, Her Feminist Gospel & the Christianity We Haven’t Tried Yet by Meggan Watterson

Mary Magdalene: Her History and Myths Revealed by Karen Ralls

He Calls Us by Name: A Bible study on discovering how Mary Magdalene’s story can inspire us to listen for Jesus’ voice by Emily Saxe

Mary Magdalene is a fascinating figure in the Bible, and her story has been interpreted in many different ways over the years. We hope that this post provided some new insights into her life and what she may have been like. What do you think? Did you learn anything new about Mary Magdalene from this article? Let us know in the comments!