In November, our church did a series on Adoption. How we were all chosen, loved and adopted by God. It was fitting that the sermon series was held in November as November is National Adoption Month. (If you’d like to hear the sermon that prompted this post, you can find it HERE)

18 And, “I will be a Father to you, and you will be my sons and daughters, says the Lord Almighty.”

Hearing about adoption always brings up a lot of emotions for me as  I was adopted as an infant. My parents were not able to have children of their own, but desperately wanted a baby. They tried for years and sadly, had a number of miscarriages and stillborn children. They knew that the only path to a child was through adoption. While they went through the adoption process and waited for the phone to ring, an unmarried pregnant woman was agonizing over what to do with the child in her womb. While she was thirty years’ old, she was unmarried. Her family decided that the best course of action was to place her in a home for unwed mothers (it was the 60’s, after all and she would have undoubtedly brought shame to the family in her condition). In October of 1966, I was born and placed in a foster home through Catholic Family Charities.

Two and a half months later, my parents, while on their way out for a holiday party, received “the call”. They had a baby waiting for them! A baby girl. Mom, Dad and my Aunt Carrie and Uncle John, who were with them headed out for the holiday gathering, jumped in a car, drove to the port and hopped on a ferry to New York City. They were to pick me up at the adoption agency near Central Park.

Family lore has it that, when my mom first diapered me at the agency, she put on two diapers, just in case. The tale also includes my father not having the suit he wore that night laundered as he never wanted that pink baby blanket fuzz to be washed away. It was his reminder of how I joined their family. My parents were thrilled to have a baby and loved me unconditionally. 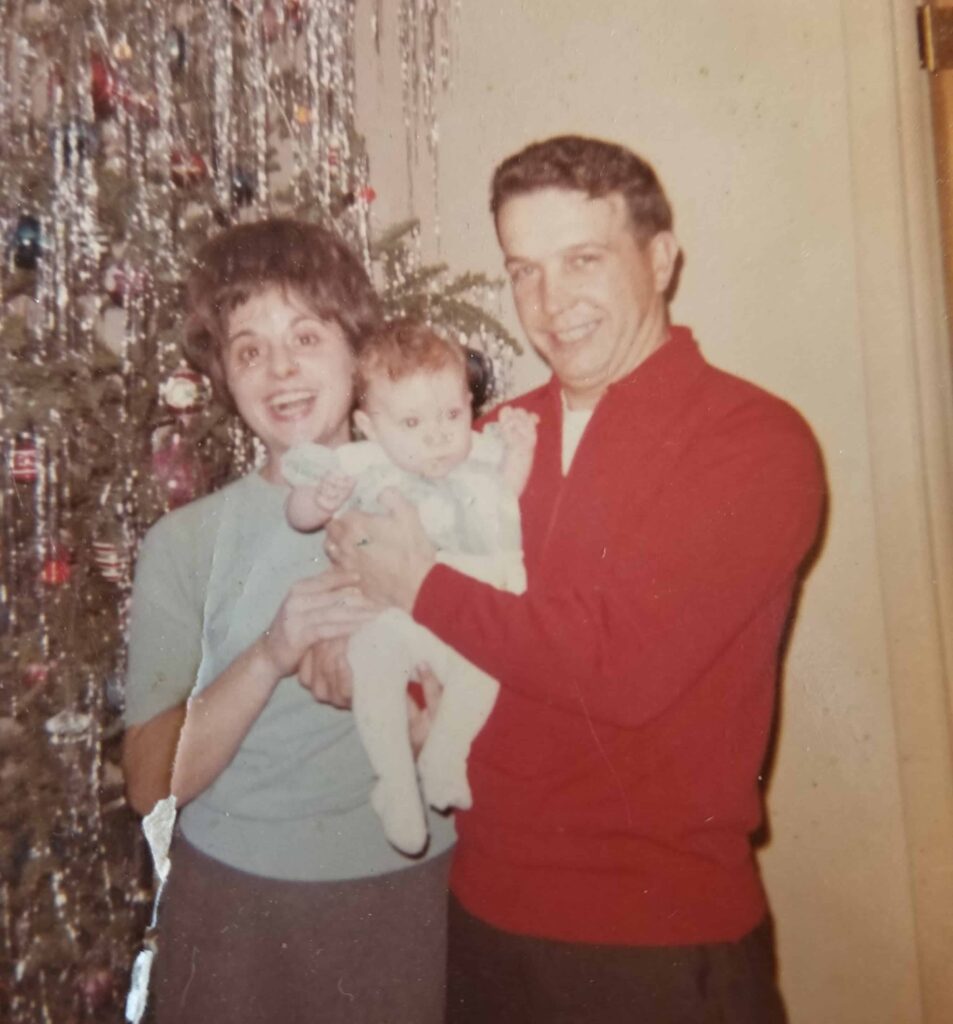 I had an idyllic childhood. Lots of love, family dinners each night, road trips all over the east coast; I wanted for nothing.

I’d always know that I was adopted. There was never a time that I remember my parents sitting down with me to tell me how I became their child. It was always a part of who I was. I remember a two-volume book set about adoption. One for me and one for my parents. They read it to me over and over, upon my insistence until I could read on my own (supposedly at four years’ old).

I knew I was loved. I knew I was chosen, but I always struggled with my identity. I wondered who my biological parents were. I cried over why they gave me up. Was there something wrong with me? Why didn’t they love me?

As a teen, the feelings would overwhelm me. My mom was always open to the idea of me searching for my biological mother, but my father was against the idea.

Years later, when my mother was diagnosed with stage 4 ovarian cancer, she asked me to search for my birth mother. She wanted to thank her for giving me up all those years before. I started the search starting with contacting the adoption agency who was able to give me only “non-identifying information”. I learned that my mother was 31 when she had me and that she had blue eyes, was quiet and loved books and movies. My father, was married to another woman at the time of my conception. He was a truck driver, enjoyed car racing and was happy and gregarious. He had curly hair and blue eyes. He also had other children with his wife. (I had brothers and sisters!). They were both French Canadian.

Things started to make sense to me. I also had blue eyes and curly hair, was happy (although not sure gregarious!) and I loved to read. I DID have roots!. 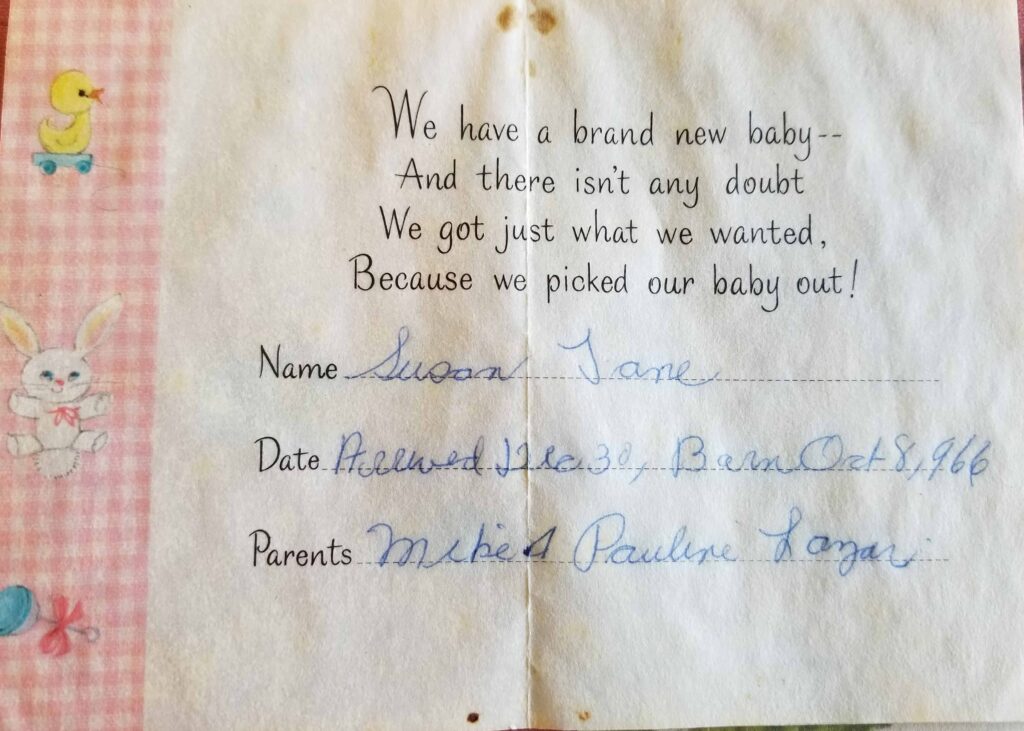 My next step was to dig through my parents adoption records to see what I could find. Of course, adoptees birth certificates are modified to show the adoptive parents names, so that was no help. I did find a baptismal certificate showing my “Godparents” in the Catholic church. The names listed were “Yolande and Clement Boisvert”. The internet was in it’s infancy then, but I was able to find a phone listing in Enfield, CT.. With hands trembling, I made the call. Stumbling over my words, I told the man on the other end “I know this may sound crazy, but I believe that you are my God parents”. He answered “Not crazy at all!. We fostered dozens of children for many years. Catholic Family Charities requires foster parents to have the babies in their care baptized”. He asked me to hold on and brought his wife to the phone. They asked questions about when I was born and where, etc. and determined that they had baby pictures of me!

While they didn’t know my birth mother, they would be happy to show me where I spent my time in foster care and give me my very first baby pictures. I was elated! That call didn’t bring me any closer to my birth mother, but it helped tell part of my story. We made plans for me to travel to Connecticut from NJ to meet them.

The next week, my friend Renee, with her daughter and my two young sons in tow, we made the trip to Enfield, CT. I settled the four of them in the hotel and drove to Douglas Road. As I approached the intersection, I began to shake. On either side of Douglas road was a street:  Brett Lane and Hunter Lane. Why would this make me shake? My two precious boys, the ones safely tucked at the hotel with my friend, were named Brett and Hunter?

This had to be God! How could I have known that the street where I spent my first few months on this earth would have surrounding streets with the names I would call my children! God sure has a sense of humor! (Below is a map of Enfield, CT showing the three streets mentioned). 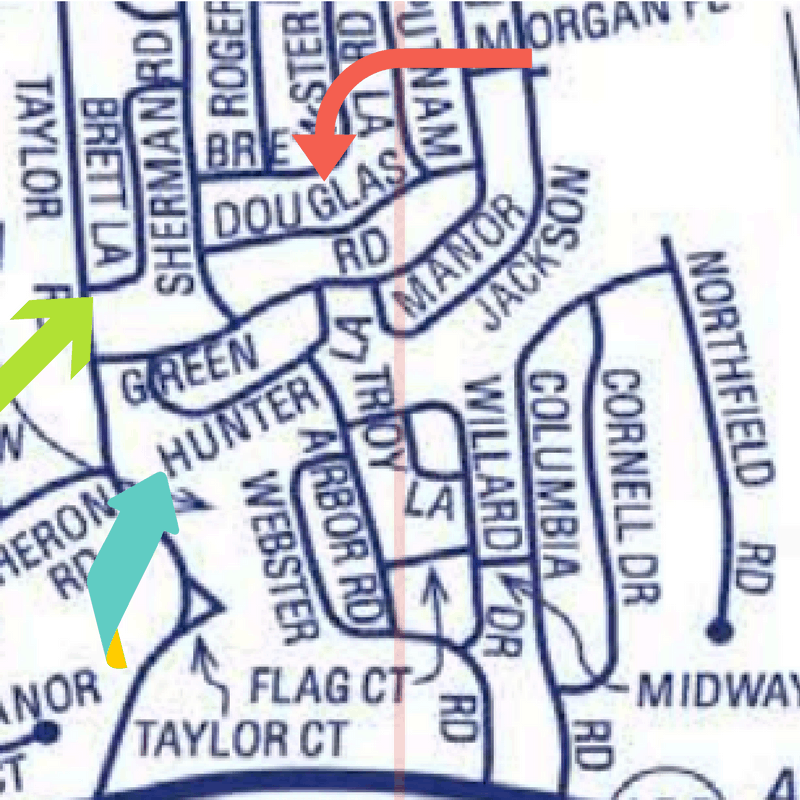 When I finally got it together, I parked at the Boisvert’s home and went in. They were warm, welcoming people – fitting for foster parents. They showed me the room and crib that I stayed in as an infant. It was still set up as after fostering children, they began to have grandchildren to fill it. And, they gave me very first baby pictures.

In addition to finding my Godparents and contacting the adoption agency, I contacted Catholic Family Charities and was put on a waiting list for them to find and contact my birth mother. About a year later, just a week after my mother losing her battle with cancer, I received a call that they found my birth mother.

They wanted to know how I would like to proceed. I told them that while I would love to meet her, most important was to obtain medical information. Soon after, the phone rang again. She refused all contact including providing medical records.

It was a difficult time in my life. I felt like I lost two mothers. One who loved me went home with the Lord. The other rejected me a second time, it felt.

I’ve thought, many times, about finding her with the help of a private investigator. It took me years to realize that she didn’t want to be found. Perhaps the memory was too painful. Perhaps she eventually married and had other children and never shared her past with them. When reflecting on this part of my history, I see God in every aspect of it:

Now, He is calling me in a different way as my husband and I prayerfully consider becoming foster parents ourselves. I would appreciated your prayers as we move according to His will for us. In fact, I ask that you pray for all involved in foster care and adoption – from social workers to foster parents, prospective adoptive families and foster families and especially the children in the “system”. Children who deserve a safe, loving home.

As an adopted child, I begged my parents to read me the book they had about being adopted. The book is no longer in publication but below are some great alternatives as well as a few good choices for adoptive parents and how we are adopted by God. I pray that they bless you. And never forget that once you are adopted into God’s family, it is forever.

Books for Adoptive Parents (or those who are considering adoption)

As a believer, you are a daughter of God. Learn more about that here.

For more about me and my story, see the About Me page on this site. Post Contents hide
1 2 Corinthians 6:18
2 My Adoption Story
2.1 My Childhood
2.2 My Search
2.3 The Trip
2.4 The Let Down
2.5 God’s Hand
3 When reflecting on this part of my history, I see God in every aspect of it:
3.1 Books for Adopted Children:
3.2 Books for Adoptive Parents (or those who are considering adoption)
3.3 Adoption in Christ
Women