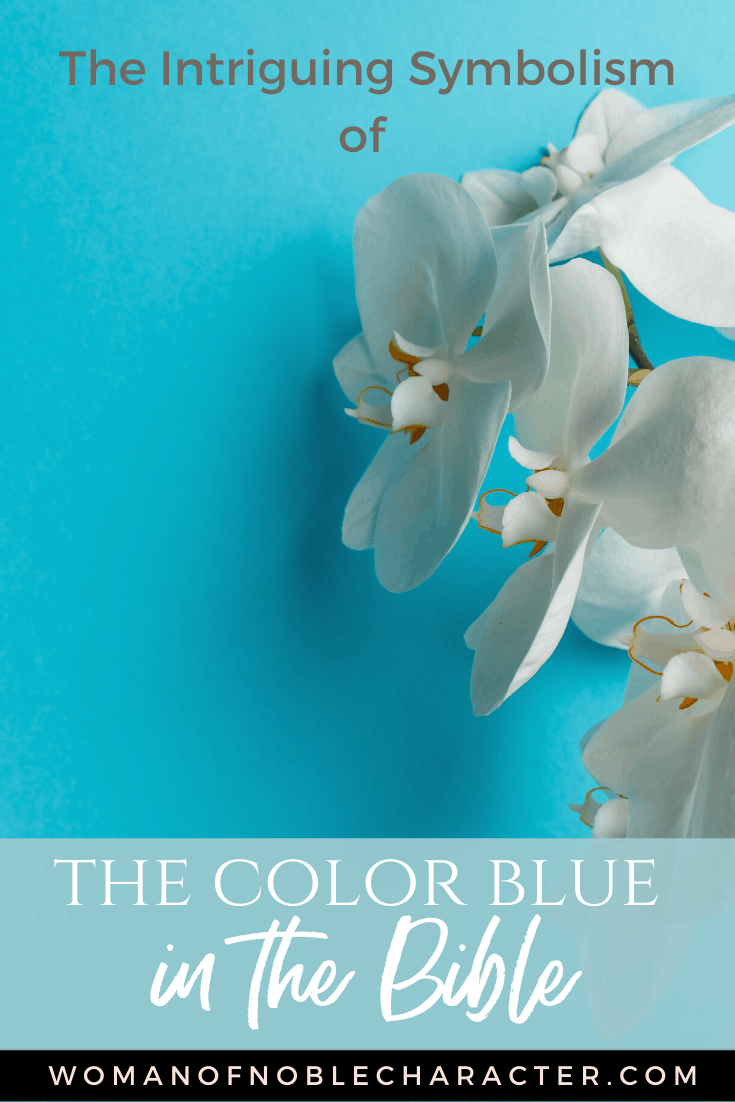 (For more on color symbolism in the Bible, see these posts on red, yellow, green, white, black)

Colors are used throughout the Bible to reflect meanings or spiritual truths. They have a symbolic significance and can remind us of God and his plan for our salvation.

Get The PDF
I have everything that you need for an in-depth study of the symbolism of colors in the Bible. (But it is a long read. If it’s more convenient, you can purchase the PDF file for only $5. It has the full article including
pictures, (this post plus 6 more going deep into the symbolism and scripture plus all of the PDFs, videos and more). This way you can print it out and will be available for you to refer to anytime you want. (Click on the book below to purchase)

This approach also includes “remez.” A remez is a hint of a hidden message or a deeper meaning that is below the surface or behind the words. Numbers and colors are both remezes.(A remez is a hint—wherein a word, phrase or other element in the text hints at a truth or a deep allegoric  – hidden or symbolic meaning).

By studying colors we are studying a form of non-verbal communication by God. He uses colors as a visual sign to represent His promises, plan for our salvation and much more.

We know that God and even Jesus in His time on earth use Bible symbolism frequently used symbolism to illustrate biblical truths.

For example, we know that Jesus was described as the “Sacrificial lamb” and Satan is often symbolized by a serpent.

In other passages, we know that Daniel was gifted the ability to interpret dream symbolism for King Nebuchadnezzar. In these dreams, God was speaking in symbolism.

Even today, God speaks to us through symbolism. For example, rainbows are a symbol of God’s promise that He won’t destroy the world by a flood again.

God may speak to you through symbolism, as well.

Colors in the Bible have deep symbolism, but many colors have multiple meanings.

Blue in the Bible

The color blue, according to many Bible scholars, represents Heaven. Blue is the color of the sky and a reminder of the heavenly realm. We are given a glimpse of Heaven when we read the description of what Moses, Aaron, Nadab, and Abihu (the sons of Moses), and the 70 elders of Israel saw when they went up to Mount Sinai to worship God.

The Bible explains that they not only saw God but that under His feet was a pavement made of Sapphires.

“And they saw the God of Israel: and there was under his feet as it were a paved work of a sapphire stone, and as it were the body of heaven in his clearness.” – Exodus 24:10

The Hebrew term for “blue” is tekelet which is sometimes translated as “purple” (Ezekiel 23:6) or “violet” (Jeremiah 10:9) and is a reference to the animal from which the dye comes from.. Blue dyes were somewhat inferior to the more royal dye purple, but still very popular and rather expensive.

It is interesting to note, however, that a word for blue, in Hebrew, was not used until years after the Bible was written. The references in this post, use the word Tekelet which is argued to be blue.

Click the image below for a free downloadable printable with scripture about the color blue. 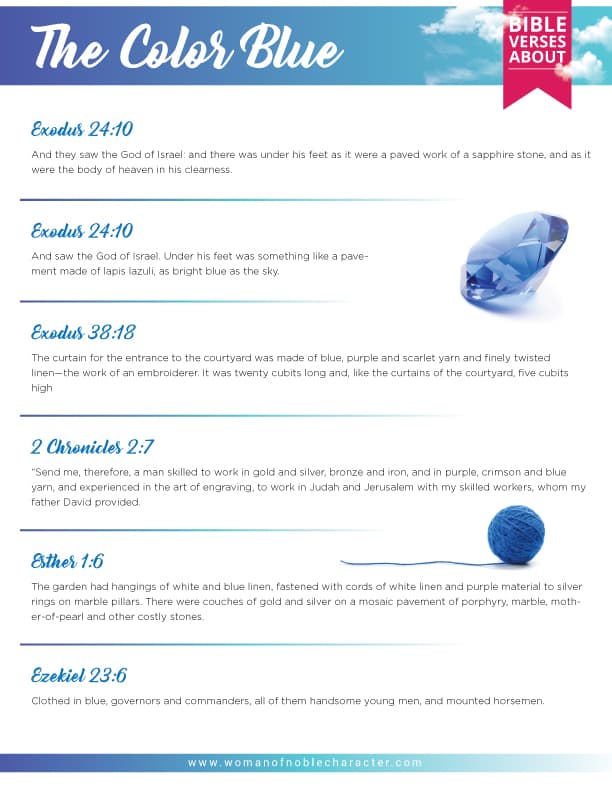 In the KJV Bible, the word ‘blue’ occurs at least fifty times, all of which are in the Old Testament. Its use in Scripture lends itself to symbolically representings God

“and saw the God of Israel. Under his feet was something like a pavement made of lapis lazuli, as bright blue as the sky.” – Exodus 24:10

“The curtain for the entrance to the courtyard was made of blue, purple and scarlet yarn and finely twisted linen—the work of an embroiderer. It was twenty cubits long and, like the curtains of the courtyard, five cubits high,” – Exodus 38:18

“Then they are to cover the curtain with a durable leather,spread a cloth of solid blue over that and put the poles in place.

Over the table of the Presence they are to spread a blue cloth and put on it the plates, dishes and bowls, and the jars for drink offerings; the bread that is continually there is to remain on it. They are to spread a scarlet cloth over them, cover that with the durable leather and put the poles in place.

They are to take a blue cloth and cover the lampstand that is for light, together with its lamps, its wick trimmers and trays, and all its jars for the olive oil used to supply it. Then they are to wrap it and all its accessories in a covering of the durable leather and put it on a carrying frame.

Over the gold altar they are to spread a blue cloth and cover that with the durable leather and put the poles in place.

They are to take all the articles used for ministering in the sanctuary, wrap them in a blue cloth, cover that with the durable leather and put them on a carrying frame.” – Numbers 4:6-12

“Send me, therefore, a man skilled to work in gold and silver, bronze and iron, and in purple, crimson and blue yarn, and experienced in the art of engraving, to work in Judah and Jerusalem with my skilled workers, whom my father David provided.” – 2 Chronicles 2:7

It has also been used to denote or represent royalty. What they wore and how their homes were adorned:

“The garden had hangings of white and blue linen, fastened with cords of white linen and purple material to silver rings on marble pillars. There were couches of gold and silver on a mosaic pavement of porphyry, marble, mother-of-pearl and other costly stones.” – Esther 1:6

“clothed in blue, governors and commanders, all of them handsome young men, and mounted horsemen.” – Ezekiel 23:6

” Hammered silver is brought from Tarshish
and gold from Uphaz.
What the craftsman and goldsmith have made
is then dressed in blue and purple—
all made by skilled workers.” – Jeremiah 10:9

The color blue in the Bible has also been used in the connotation of riches (I mean, who but the rich could adorn their sails and banners with fine embroidery? 🙂 )

“Fine embroidered linen from Egypt was your sail
and served as your banner;
your awnings were of blue and purple
from the coasts of Elishah.” – Ezekiel 27:7

“In your marketplace they traded with you beautiful garments, blue fabric, embroidered work and multicolored rugs with cords twisted and tightly knotted.” -Ezekiel 27:24

Other Meanings of the Color Blue in the Bible

Blue is also associated with physical punishment (most precisely ‘blueness’ caused by bruising), which cleanses the evil as well as brings an inner sense of sin as mentioned in the following verse:

The blueness of a wound cleanseth away evil: so do stripes the inward parts of the belly.
– Proverbs 20:30, KJV

The color blue in the Bible has also been described by scholars as denoting the Holy Spirit and truth or service to God and godly living. Lighter shades of blue in the bible may also represent the Virgin Mary

A bit on the use of dyeing with the color blue

Several Biblical commentaries state that the liquid from which blue dye originated came from a shellfish native to the Mediterranean Sea. Others believe that the colors comes from the rind of pomegranates. The process of using it for dyeing entailed soaking clothe in dye vats and then letting them dry. This process was repeated several times until arriving at the desired color. The final step was soaking the cloth in a solution that would render the cloth colorfast. (I’ve been unable to find information on what that solution was).

Other Variations or Shades of Blue in the Bible

Sapphires, one of the many gemstones mentioned in the Bible is found nine times in God’s word. This gorgeous gem is a beautiful sky blue color reminding us of not only they sky, but also heaven.

Sapphires are also found on the ‘breastplate of judgment’ sometimes worn by the High Priest (Exodus 28:18). This blue gem was one of several that God personally placed as ornamentation on Lucifer when he created him (Ezekiel 28:13). This stone, according to Revelation 21:19, will be used to decorate one of the twelve foundations God will create for the New Jerusalem.

“The foundations of the city walls were decorated with every kind of precious stone. The first foundation was jasper, the second sapphire, the third agate, the fourth emerald,” – Revelation 21:19

Represents the river of God, sanctification, the New Jerusalem, and God’s healing. 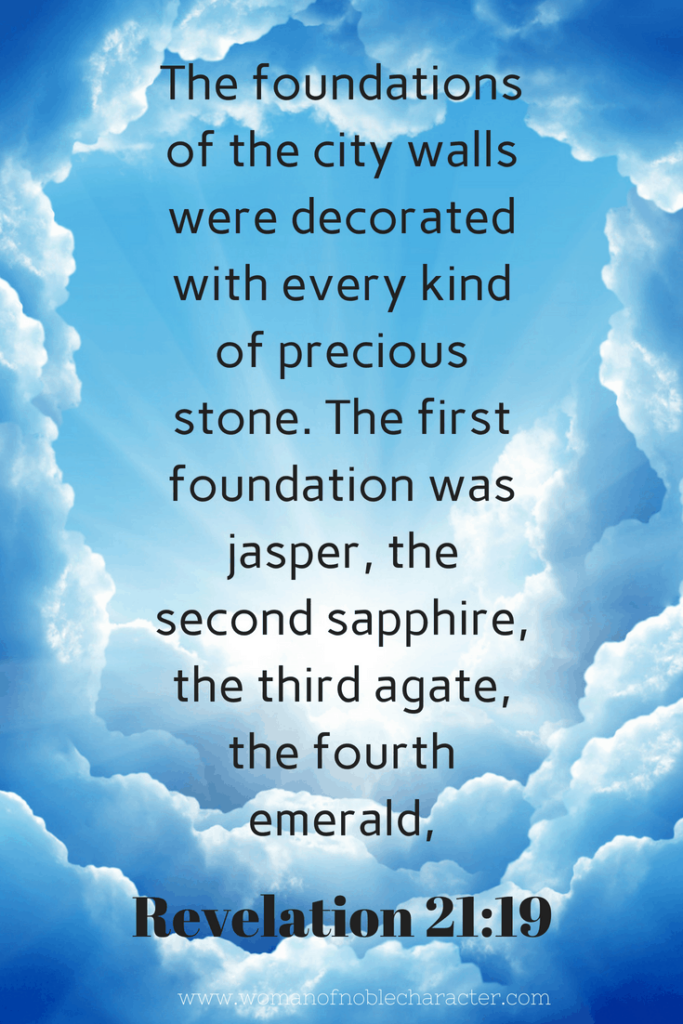 Personally, I find Bible symbolism fascinating and as a creative person, I enjoy the use of colors in everything from what I wear to how I decorate my own. My favorite color is turquoise and, after studying the color blue in the Bible, each time, I wear a blue shirt, I’ll remember the significance and feel closer to our Heavenly Father.

You may enjoy this video by Jim Staley about the color blue in the Bible.

Did you learn something new about color in the Bible in this post? I’d love if you’d share that with me. 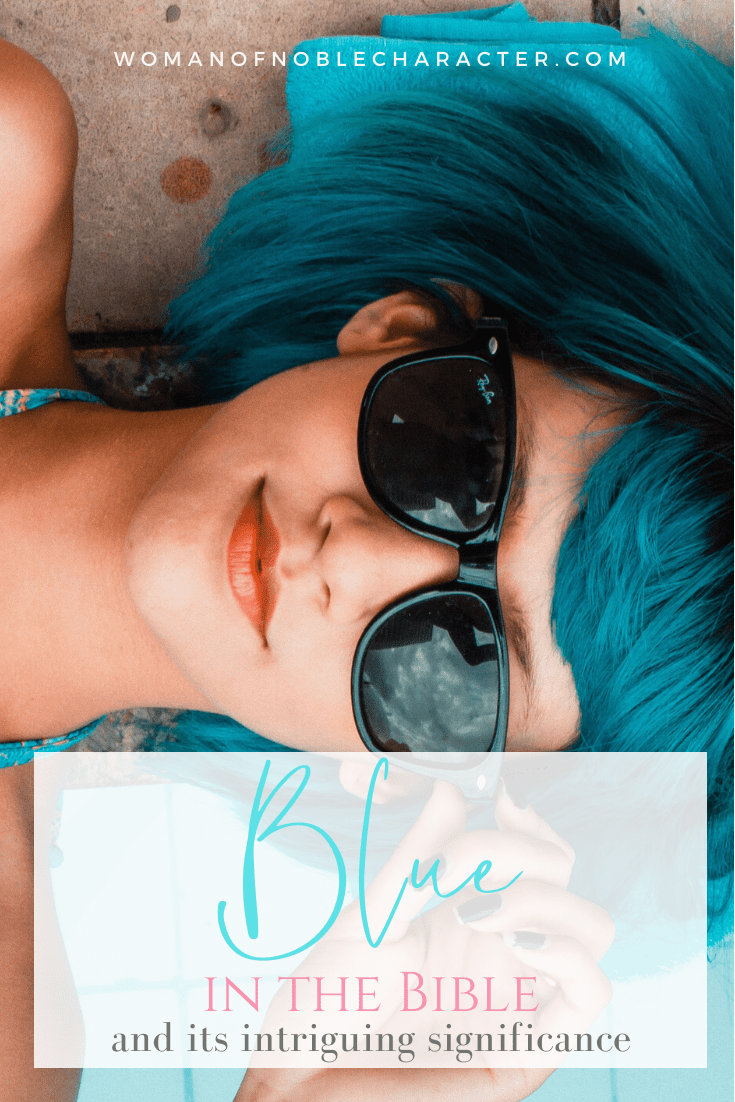