Skip to Content
Home Blog Spiritual Growth Who was Simeon in the Bible? The Tribe of Simeon: History & 4 Lessons We can Learn 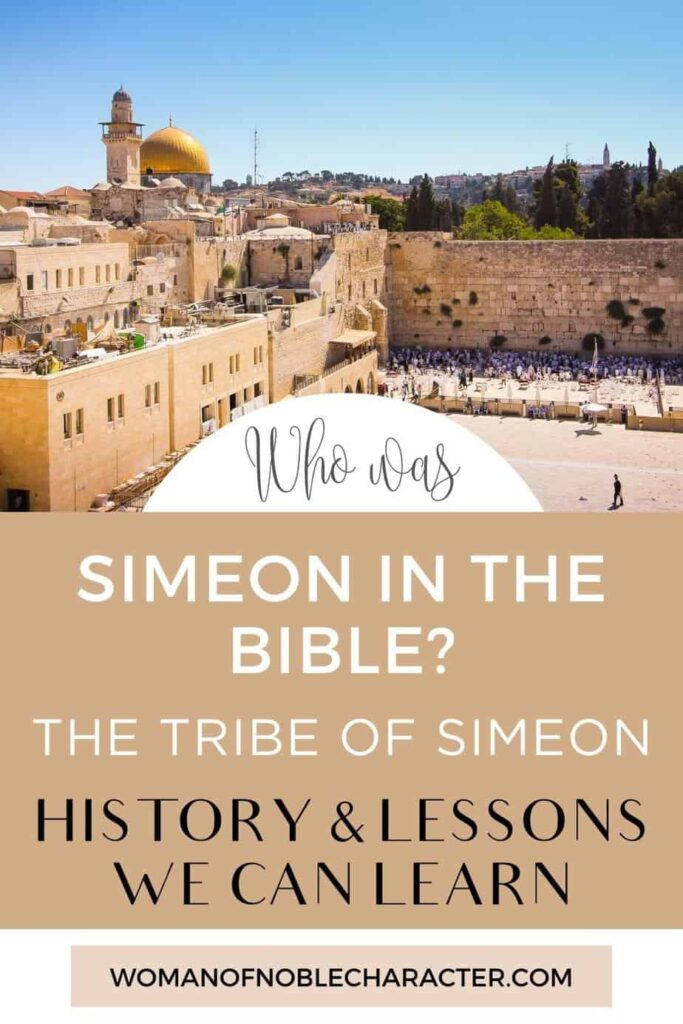 Who was Simeon in the Bible?

There are four different men in the Bible named Simeon. Simeon, a son of Jacob (Genesis 29:33); Simeon, a man who met the baby Jesus in the temple of Jerusalem (Luke 2:25); Simeon, a church member in Antioch (Acts 13:1); and Simeon who was listed in the lineage of Jesus (Luke 3:30).

Simeon in the Bible: the son of Jacob

Simeon was Jacob’s second son with his wife Leah, and he had a reputation for vengeful and angry behavior.

His name come from the Hebrew word shaama, which means “hear”.

You can find everything that you are looking for about the Tribes of Israel on my website, but if you would like a study of all 12 Tribes of Israel, (plus the two half tribes) you can purchase the eBook for your convenience. No ads, no pop ups and you’ll have it forever to refer to when studying the sons of Jacob. It includes videos and additional downloads. The best part – it’s only $10 for over 230 pages!! Your choice, read it here or have it forever.

His sister Dinah was kidnapped and raped by a Hivite named Shechem, a local ruler’s son (Genesis 34:2), which naturally caused Jacob and all of his sons to be furious (Genesis 34:7).

Shechem’s father, Hamor, asked Jacob’s family to form a marriage between his son and Dinah. The sons of Jacob presented a false treaty to Hamor and Shechem which involved all of the men of the city being circumcised, to which Hamor and Shechem agreed (Genesis 34:13–24).

However, Simeon and Levi, another of Dinah’s brothers, took advantage of the men while they were still in pain from the circumcision and killed all of them, bringing their sister Dinah home with them (Genesis 34:25–29).

The sons were rebuked by Jacob for the repercussions their vengeful act would bring to his relations with the peoples living in that land (Genesis 34:30).

Simeon was also one of the of brothers who sold Joseph into slavery and then lied to Jacob, saying that Joseph had been killed by a wild animal (Genesis 37).

The Bible also shows that Simeon was a man of envy and hatred. He and his brothers were jealous of their father’s love for Joseph and angered by Joseph’s dreams that the brothers felt were pure arrogance, so they sold Joseph into slavery (Genesis 37).

Simeon was then complicit in leading their father to believe that Joseph had been killed by a fierce animal.

During the life of Joseph in Egypt Simeon was chosen by Joseph as the hostage for the return of Benjamin. Joseph’s choosing Simeon as the hostage in exchange for Benjamin was possibly due to his having been a leader in the brothers’ cruel attack (Genesis 37; Genesis 42:24).

Despite Simeon’s wrongdoing, we see God’s love and grace. Simeon was justly rebuked and cursed by his father, but he was also honored by Jacob as recorded in two special moments.

The first occurs when Jacob, still grieving the supposed death of Joseph, is presented with the possibility that he might lose Simeon as well and equates Simeon with his two favorite children, Joseph and Benjamin: “You have deprived me of my children. Joseph is no more and Simeon is no more, and now you want to take Benjamin. Everything is against me” (Genesis 42:36).

We also see Jacob’s grace when he recognizes Joseph’s sons as being equal to Reuben and Simeon, his first and second born. In this blessing of his grandchildren, Jacob, despite Simeon’s prior violence, murder, and lies, recognizes Simeon’s rightful place in the family.

The Tribe of Simeon

At the time of the census at Sinai, the tribe of Simeon nearly 59,300 strong made up of fighting men. It was then the most numerous tribe after Judah and Daniel.   The Tribe of Simeon depended upon Judah for the conquest of its portion of the land.   This tribe received as their portion a part of the territory already allotted to Judah (Joshua 19:1-9). It was located in the South-West of the land, with Judah on the East and Dan on the North; The tribe of Simeon settled in the southwest part of Israel between Judah and Philistia.

The tribe of Simeon was “divided and scattered” according to the prediction in Genesis 49:5-7.

Judah and Simeon joined together in the conquest of southern Canaan (Judges 1:3; Judges 1:17).

They gradually dwindled in number and sank into a position of insignificance among the other tribes. They decreased in the wilderness by about two-thirds. Moses pronounces no blessing on this tribe. It is passed by in silence (Deuteronomy 33).   Later the Tribe of Simeon was dwindled to just 22,000 at Shittim. At Shittim it had become the smallest, numbering 22,200.

The leading cause of the significant drop in tribe members is due to the high mortality rate as a result of the idolatry of Peor. (Numbers 25:9; Numbers 25:14).   It was eventually absorbed by Judah, Exodus 15:16 and Numbers 1:23.   Like Reuben on the east of Jordan, this tribe had little influence on the history of Israel. It is considered one of the “lost tribes”.

In Revelation 7:7 the tribe of Simeon is listed in a place of honor, among the twelve tribes of Israel who are sealed by God’s protection in the tribulation. Simeon, son of Jacob, is referenced throughout the Pentateuch and seven times in the book of Joshua. Simeon and/or the tribe that bears his name is also mentioned in the historical records of 1 and 2 Chronicles and in the book of Ezekiel.

On his deathbed, Jacob gave a prophetic blessing (or curse) to each of his sons. Jacob cursed Simeon and his brother Levi for their violence:

A few hundred years later, Jacob’s curse came to fruition when the tribe of Simeon, which was very small, had no choice but to share their territory within the Promised Land with the larger tribe of Judah (Joshua 19:1–9).

Even so, Jacob showed grace to Simeon and recognized him as a treasured son when he thought he had lost him.

Simeon’s story reminds us that while there is nothing wrong with seeking justice, vengeance belongs only to God.

God shows His grace to Simeon’s lineage in Revelation 7:7 where the tribe of Simeon is included in the list of the honored twelve tribes of Israel who will be protected by God during the tribulation.

Key Bible Verses about the Tribe of Simeon

What can we learn from the tribe of Simeon?

Your actions will determine your blessings (or lack of)

Each of the twelve sons of Israel received a blessing from their father, Jacob, just before his death. The twelve sons were the originators or “founders” of the twelve tribes of Israel, and each blessing included prophecy about the future of each tribe. In the case of the tribe of Simeon, which was paired in the prophecy with the tribe of Levi, Jacob prophesied about Simeon (and Levi):

Basically, Simeon and Levi received little inheritance and the tribes were scattered due to their behavior.   Think about your actions, words and thoughts and consider the ramifications on this earth and in heaven for each.

Think about your actions, words and thoughts and consider the ramifications on this earth and in heaven for each.

Think about your actions, words and thoughts and consider the ramifications on this earth and in heaven for each. Click To Tweet

Anger Can Cause Us to Sin

When we read the story of Simeon in the Bible, we learn that anger can cause things to boil over and result in sin. People are hurt and we let that anger turn into health problems and even more unhealthy behavior including hurting others.

Anger leaves a trail of hurt and hardened hearts and in some cases, devastation. Additionally, we can be angry about sin but need to be prayerful that we have to separate the sin from the sinner. We aren’t to love the sin but should never hate or be angry at the sinner as we all fall short, at times. We are to love our neighbors but not their sins.

Don’t Take Counsel or Advice from an Angry Person

Jacob stated “Let me not enter their counsel; let me not join their assembly. That statement is a lesson for us, as well. When someone is angry, they are not able to think clearly or control their emotions.   When anger is in our hearts continually it is an indication of a lack of self-control.    is a defining trait in another’s life, it is an indication of the lack of self-control. Self-control is one of the fruits of the spirit and so critical to the Christian walk:

When someone is angry, they are not able to give good advice as their anger clouds their perspective. When possible, avoid any angry person – until they are able to confess their anger and are able to deal with it in a godly manner.

Siblings Can Bring Out the Best or Worst in Each Other

Siblings can have complicated relationships. Simeon and Levi appear almost always together in scripture but, like many brothers and sisters, they seem to have brought out the worst in each other.   As Christian parents, we should pay attention to our children who develop either unhealthy relationships or who bring out the worst in each other. Sometimes even separating them when one might be in a circumstance to encourage the other to sin or misbehave.

Encourage good relationships between your children and help them to bring out the best in each other.

Sermon on the Tribe of Simeon (and its Inheritance)

You may enjoy this sermon (it’s on the long side, but fascinating) by Messiah Matters by Torah Resource:

For additional reading, you may enjoy these recommended resources on the Tribe of Simeon in the Bible and The Lost Tribes of Israel.

The Ten Lost Tribes: The History and Mystery of the Lost Tribes of Israel by Charles River Editors

How are you enjoying the series on the twelve tribes of Israel? Did you learn anything new about the tribe of Simeon? Tell me in the comments below – your opinion matters to me!